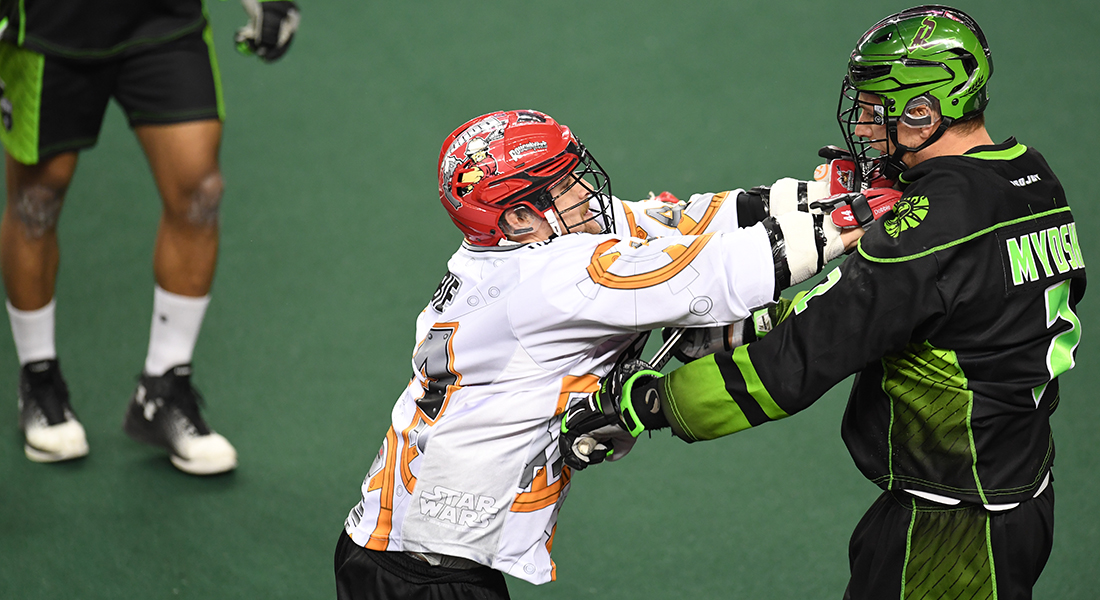 The Roughnecks are looking to win their fourth straight game as they head to Saskatoon for a battle with the Saskatchewan Rush.

The Roughnecks defenders will face a tough task against a Rush roster that leads the league with 150 goals in 10 games. With seven runners already surpassing the 20-point plateau, Saskatchewan’s production has come by committee, but there are obvious offensive heavyweights in the Rush lineup. Robert Church, with 58 points, and Mark Matthews, with 57, sit second and third in the league points race, respectively. Ben McIntosh, meanwhile, leads the NLL with 28 goals. The trio have combined for 21 of the Rush’s last 38 goals, accounting for 55.3% of the team’s goal-scoring over its last three games. If the Roughnecks hope to slow down Saskatchewan’s high-flying offence, they’ll have to limit the contributions from the Rush’s Big Three.

One of the best ways for the Roughnecks to minimize Saskatchewan’s offensive output will be staying out of the penalty box. The Rush boast the league’s top powerplay this season, with 31 goals on 43 man-advantage opportunities (72.1%). Over five games dating back to their last meeting with the Riggers, Saskatchewan has 13 goals on 16 powerplays (81.3%). That includes a perfect four-for-four outing in their last game against the Rochester Knighthawks, who own the league’s best penalty-killing percentage (56.1%). The Roughnecks have been shorthanded a league-low seven times when playing on the road this season and they’ll need to continue that trend if they hope to overcome the league’s deadliest powerplay.

Dane Dobbie returns to the Roughnecks lineup after serving a one-game suspension for an illegal cross-check on Saskatchewan’s Brett Mydske during the Riggers 13-12 overtime loss to the Rush on Jan. 27. The suspension was delayed as it was being appealed, but the decision was ultimately upheld. Although the Roughnecks posted their highest offensive output since 2015 in a 20-12 win over the Stealth without Dobbie on Feb. 16, the team will no doubt get a boost from the return of the franchise’s all-time points leader. Prior to that win over Vancouver, Dobbie led the team with 35 ponts (15G+20A). He enters Saturday’s matchup tied with Wesley Berg for third in team scoring behind Curtis Dickson (41 pts) and Holden Cattoni (37 pts).

THE HUNT FOR FOUR

The Riggers enter Saturday’s contest on a three-game winning streak thanks to consecutive victories over Toronto, Colorado and Vancouver. After starting the season 1-5, the Roughnecks have catapulted themselves back into contention for a home playoff date. A win on Saturday would mark the team’s first four-game winning streak since the Riggers won four in a row from Feb. 8 to March 1 during the 2014 NLL season. The 2014 Roughnecks finished second in the West Division with a 12-6 record and went on to win the Western championship before falling to the Rochester Knighthawks in the Champion’s Cup Finals.

While the Rush own the league’s best record at 8-2, they enter Saturday’s matchup following a 16-11 loss to Rochester on Feb. 17. The Knighthawks held the advantage in shots on goal, loose balls and faceoffs, while Saskatchewan goalie Evan Kirk — the 2016 NLL Goaltender of the Year — was pulled in the second quarter after allowing eight goals on 27 shots. The last time the Roughnecks faced the Rush, Saskatchewan was coming off their first loss of the season, a 16-15 overtime defeat at the hands of the Mammoth. That contest at the Scotiabank Saddledome also needed overtime, with the Rush ultimately prevailing by a 13-12 score. The Roughnecks entered that match on a three-game losing skid, but are 3-0 since then while averaging more than 16 goals a game. Saskatchewan, meanwhile, has scored more than 13 goals just once in their last five games, and will be facing a much hotter Roughnecks team this time around.