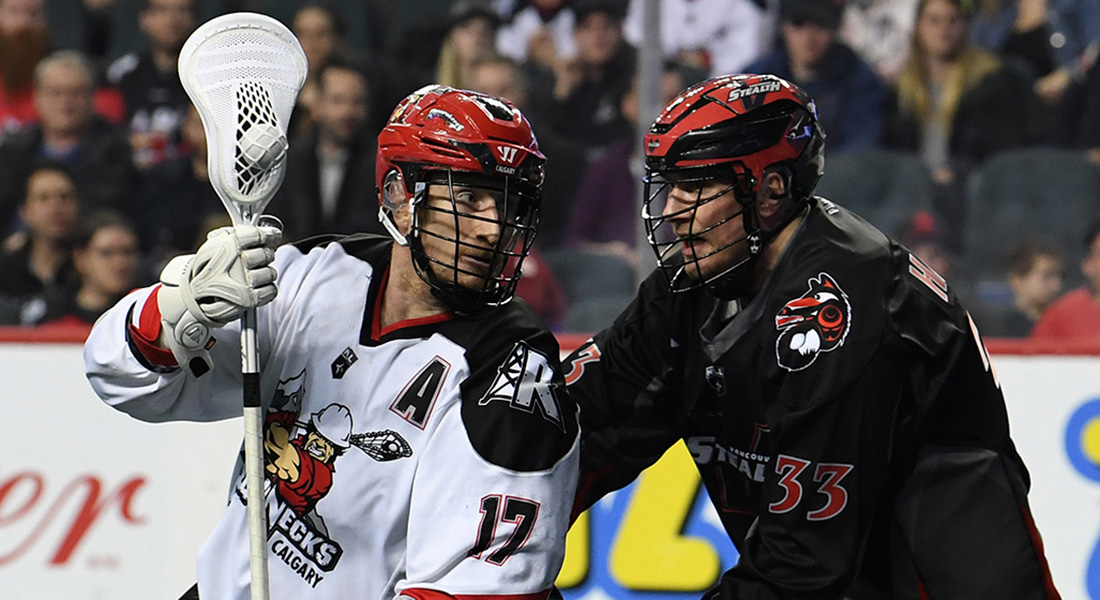 The Roughnecks won their third straight game, beating up on the lowly Vancouver Stealth with an exciting 20-12 home victory on Friday night.

There was plenty of offence through all four quarters of play in Friday night’s 20-12 win over the Stealth, but it was the second frame that proved to be the difference. Leading 5-3 after the opening 15 minutes, the Roughnecks started the second with an 8-0 run to blow the game open with a 10-goal lead. The Stealth finally scored with less than three minutes to play in the first half, going more than 13 minutes between goals, but by then the game was nearly out of reach. Vancouver would score four straight goals over the third and fourth quarters to cut the Riggers advantage down to six, but that was as close as the visitors would get as the teams traded tallies through most of the final frame.

One Roughneck’s name was called more often than any other during the home team’s second-quarter onslaught. Holden Cattoni scored three of his team’s first five goals of the second frame, completing a hat trick in four minutes and 47 seconds while also adding an assist in that span. It was just one portion of a career night for the second-year forward, who led the Riggers with five goals and six assists in a colossal 11-point outing. Despite team points leader Dane Dobbie sitting a one-game suspension, the team’s offence didn’t miss a beat thanks to Cattoni, as the Roughnecks posted their highest offensive output since a 20-9 win over New England on March 20, 2015.

While Cattoni was Roughnecks offensive heavyweight on Friday, he certainly wasn’t being forced to carry his team. Of the 17 runners that dressed for the Riggers, only four did not record a point against Vancouver. Of the 13 Roughnecks that got on the scoresheet, nine had two points or more. Along with Cattoni, Wesley Berg, Curtis Dickson and Tyler Pace all had hat tricks as nine different Riggers scored at least one goal.

It’s not often that a team’s goaltender records more points than most of the opponent’s runners, but that’s exactly what happened against the Stealth. Christian Del Bianco was stretching the field all night long, generating offensive opportunities for his team mates with long passes in transition. The result was a three-assists night for the 20-year-old goaltender, all of them primary helpers. With three points, Del Bianco outscored all but four of the Stealth’s runners. Of course, Del Bianco was also a major factor in that limited Vancouver offence, stopping 48 of the 60 shots sent his way.

If there was one blemish on the Roughnecks otherwise dominant victory, it was the home team’s play on special teams. Despite entering the match with the league’s worst road powerplay (35%), the Stealth went two-for-three on the man-advantage against the Roughnecks. The Riggers, meanwhile, failed to capitalize against the NLL’s eighth-ranked penalty kill, going scoreless on four opportunities. The Roughnecks lead the NLL with seven shorthanded goals this year, six of which have come at home. Against Vancouver, though, the Riggers failed to record a shorthanded tally. Instead, it was the Stealth scoring their first shorthanded marker of the season, generating more offence on the Roughnecks powerplay than the Riggers themselves. The Roughnecks special teams will look to bounce back in their next outing on Feb. 24 against the Saskatchewan Rush.