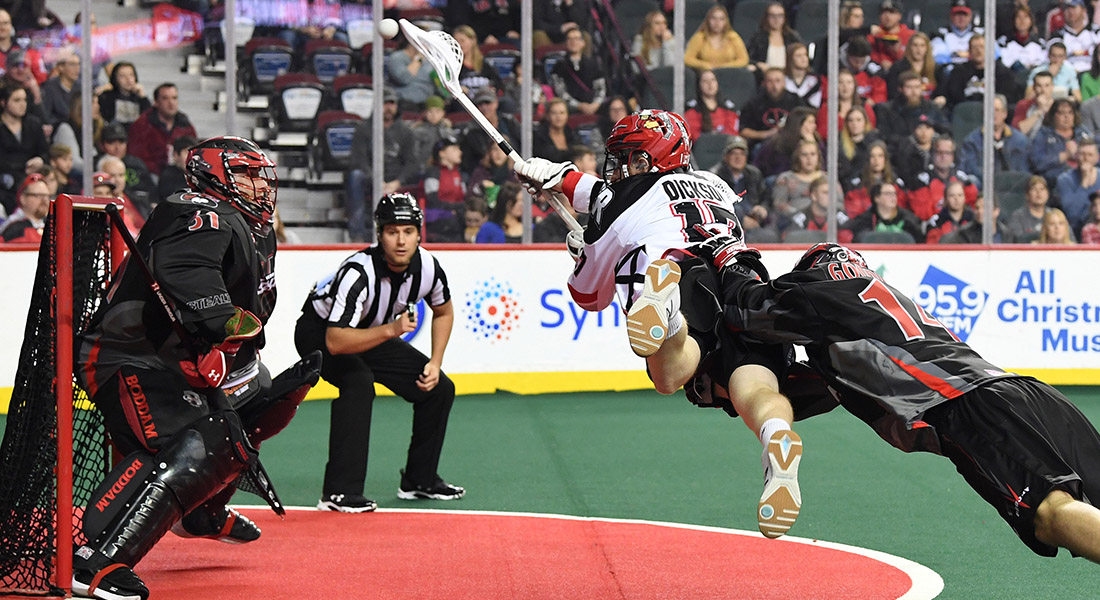 The Roughnecks treated their fans to a 15-12 victory over the visiting Vancouver Stealth in their home-opener on Dec. 15.

The big man between the pipes was exceptional for his club in the victory, stopping 51. Although he admits there were some goals he wanted back, his effort and composure was top notch throughout the contest. After giving up a goal, he would bounce back with multiple great saves to keep his team in front. His presence in the crease was a major factor to the Roughnecks’ success.

The transition game was a big part of the Roughnecks offence in Rochester and that didn’t change in their home opener. Multiple defenders found their names on the score sheet, with points from Zach Currier (1g), Dan MacRae (1a), Garrett McIntosh (2a), Tyler Burton (1a), Mitch Wilde (1g, 1a), and Tyson Bell (2a) — the current leader in defensive scoring in the NLL with five points. Even Scigliano added two points to his resume, with a pair of great outlet passes that lead to goals.

After a down performance by the offence in the season-opener in Rochester Dec. 9, the forwards came out firing on Friday. In the first quarter, lefty Holden Cattoni had the hot stick and scored a natural hat-trick. Fellow southpaw Riley Loewen completed his hat-trick late in the third quarter, putting an exclamation point on the team’s six-goal quarter, which was the difference in the game. For good measure, Curtis Dickson added a late fourth-quarter goal for his third of the contest.

After injuries forced Bob Snider and Greg Harnett from the game, the Roughnecks were without two key players on their defence. The remaining 15 runners on the Riggers bench showed great determination and grit to continue to battle and play at such a high level despite missing two warriors.

The special teams’ battle is crucial to the success in the NLL. So when your penalty-kill holds the opposition to just one powerplay goal — which they scored late in the fourth quarter — and score two short-handed markers, you’ve done pretty well for yourself. The Roughnecks PK was extremely strong all game and didn’t give an inch to the Stealth forwards. Not letting the Vancouver powerplay gain any momentum with their many PPs was huge in the win.