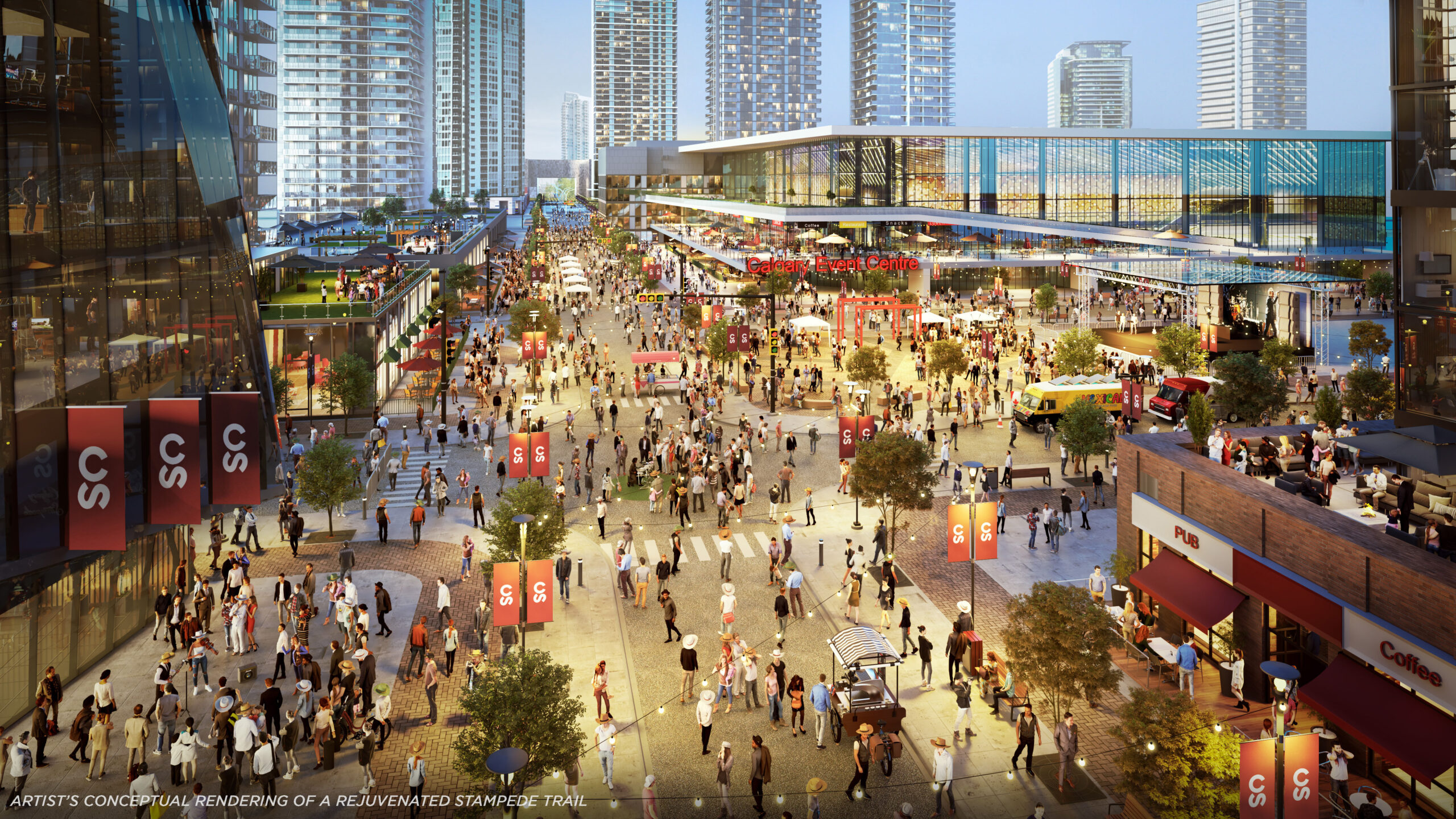 Calgary, July 22, 2019. The City of Calgary (the “City”), Calgary Sports and Entertainment Corporation (“CSEC”) and the Calgary Exhibition and Stampede Limited (“Stampede”) confirmed today that they have agreed to fundamental terms and conditions for the development and construction of a new public sports and entertainment event centre.

The agreement lays out the terms of a partnership that will see the creation of facilities to serve as public gathering places for significant events, attract world-leading performing artists and serve as a new home to the Calgary Flames, Hitmen and Roughnecks. In addition to the new event centre, the vision for the area adjacent to the facility includes a purpose-built outdoor festival space and infrastructure enhancements to Stampede Park, all of which will serve as a catalyst for the development of Calgary’s Culture and Entertainment District.

The estimated cost of the event centre is $550 million, which will be shared 50/50 between The City and CSEC. With its 50 per cent investment, The City will own 100 per cent of the event centre. CSEC will bear 100 per cent of the operating, maintenance and repair costs for the period of the 35-year agreement. The City will also receive a facility fee for the lifetime of the agreement and a portion of the event centre naming rights. In addition, value will be created for The City as a result of increased property tax revenue. Local amateur sports organizations will benefit from CSEC’s commitment to provide them with $75 million in added funding over 35 years. All of this ensures there will be a long-term, sustainable return on investment for the benefit of all Calgarians.

“City Council and I had a set of principles that had to be part of any deal, including that any public money must result in public benefit. I’m very pleased that this deal achieves that. It’s a good deal for Calgary. This deal makes sense on its own merits and we believe it will help accelerate the redevelopment of East Victoria Park,” said Mayor Naheed Nenshi. “Thank you to CSEC, CMLC, the Calgary Stampede, my colleagues at The City and especially Barry Munro who epitomizes the best of service and community building for working so hard to craft a deal that works for everyone.”

Located adjacent to the downtown core in East Victoria Park, the project will form part of Calgary’s cultural nexus, which includes the BMO Centre, Arts Commons, the Calgary Central Library, Studio Bell and the National Music Centre. The project will bring a number of benefits, including:

Warren Connell, CEO of the Calgary Stampede, added: “As a community builder, we are delighted to be working closely with The City and CSEC to support our vision of creating a world-class, year-round, gathering place for the community.”

The agreement has been shaped by 14 months of review, analysis and consultation by The City’s Event Centre Assessment Committee, chaired by Councillor Jeff Davison. The Committee has determined the agreement meets the test of fitting the long-term goals of The City of Calgary and City Council. It is the culmination of years of discussion and negotiation between The City, CSEC and other partners. The project aligns with The City’s Rivers District Master Plan and addresses the need to replace the Saddledome, which has served Calgary well but is aging.

“After a prolonged period of stiff economic headwinds, Calgary is pivoting back towards growth. The 50/50 project funding arrangement and the ongoing revenue streams to the City and to Calgarians demonstrate the City’s commitment to risk sharing and fiscal responsibility. This project is an example of working with private partners to make long-term investments in needed public facilities,” said Davison. “As proud Calgarians, we look forward to sharing in the success of this facility and a revitalized Culture and Entertainment District in the decades to come.”

The Calgary Municipal Land Corporation (CMLC) will lead construction and development management, including public consultation on the project’s design, programming and integration into the Rivers District. CMLC is The City-owned agency responsible for the revitalization of the adjacent East Village for the past 12 years.

Leveraging CMLC’s existing management of the BMO Centre Expansion and the execution of the overall Rivers District Master Plan will further enhance the interaction of the facilities and development planning of public spaces within the area.

The agreement is subject to a seven-day public comment period and a vote of City Council on July 29, 2019 and to customary approvals by CSEC and the Stampede.

Further details, including a conceptual rendering of the event centre, can be found at www.calgary.ca/eventcentre