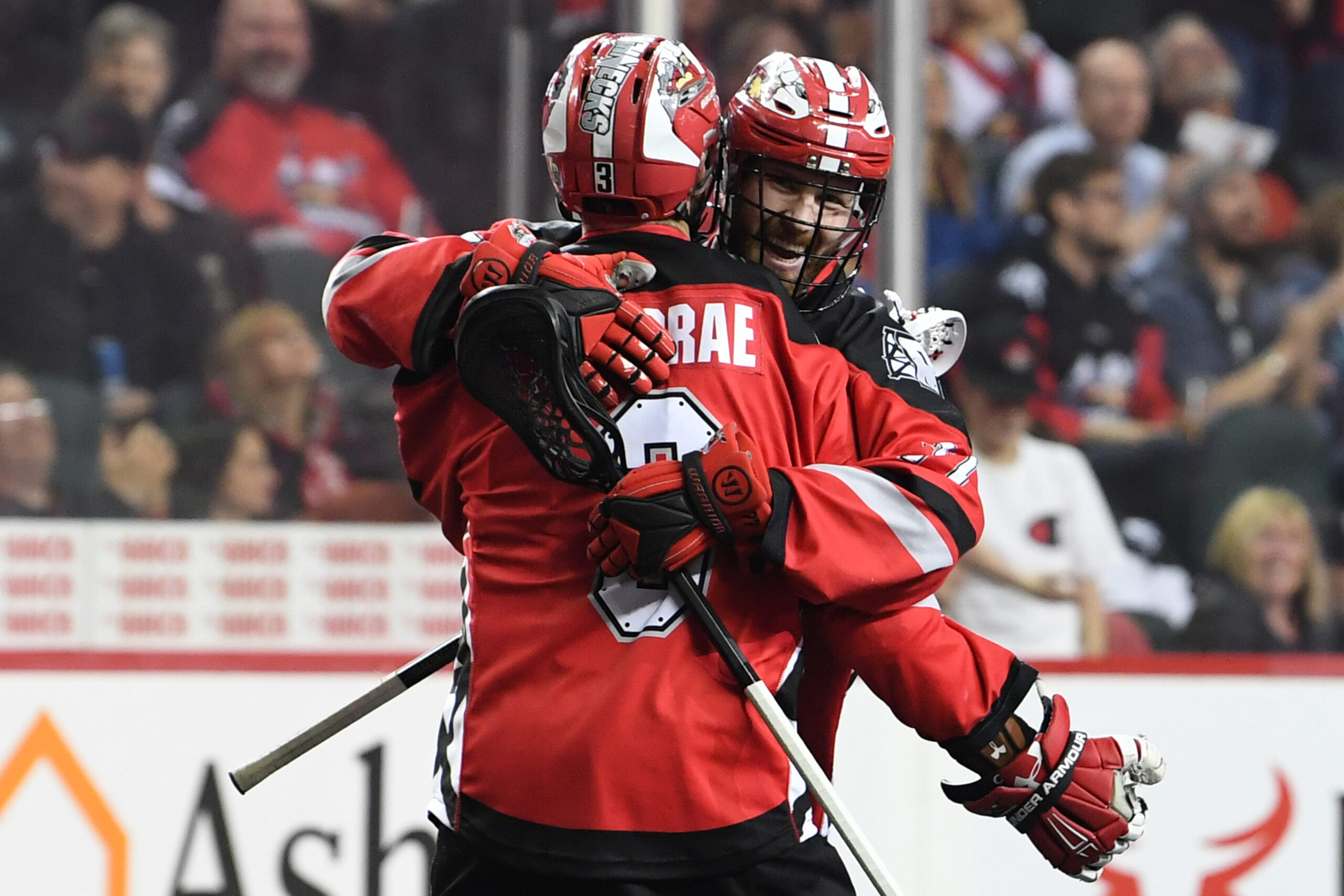 The crowd sure went home happy.

On Fan Appreciation night at the Scotiabank Saddledome, a capacity crowd of 19,289 fans enjoyed the Riggers 18-8 thrashing of the visiting Saskatchewan Rush.

Well, maybe not the three bus-loads of Rush fans in attendance.

“I looked up top and they had the upper bowl opened up so I was like, ‘Wow,’” said Coach Curt Malawsky said of the team’s first ever regular season sellout.

“You saw all the Sask fans and they were going crazy and then all of a sudden our fans drowned them out. It was great. The guys really cherish being here and being a part of the organization and the great culture we have here in Calgary and the fans top it off. It was outstanding tonight.”

“It’s special,” added captain Dan MacRae. “We started to notice in the second warm-up, we were looking around like, ‘it’s starting to fill up to the top of the saddle there.’ We knew it’d fill up once the game started. It’s awesome. I still remember — in the western finals in 2014 — it being packed and just looking around at the end of the game. Just seeing the support from the city getting behind us definitely helps us in the game when it gets down to the last few minutes. It helps us put on a good show for the fans.

“[Saskatchewan fans] are a loud bunch; they’re passionate fans. You can tell it when you go into their barn. It’s great to take the air out of their tires nice and quick.”

With the crowd roaring early in the game, the Riggers score a season-high eight goals in the first quarter and tied their season-high of six goals in the second quarter to take a 14-5 lead into halftime.

NLL scoring leader Dane Dobbie (115) was the pace-setter once again with four goals and four assists on the night.

But he had some help this evening, getting hat-tricks from Tyler Pace (4g, 2a) and Dan Taylor (3g), and receiving big contributions from Curtis Dickson (1g, 5a), Jesse King (2g, 4a), Riley Loewen (1g, 3a) and even Christian Del Bianco (3a).

“I thought all facets of our game was going really well tonight from the goaltending out,” Malawsky said. “I thought we had a lot of great efforts, but the biggest thing was collectively as a group we were pretty tight. It was a good overall game for us.

“You don’t win in this league if you don’t have that; offence by committee. Offensively, if teams come in and think they can shut down Dickson and Dobbie, we need our secondary scoring and we got that. Our guys played a good, heavy game on offence, created a lot of opportunities and the guys were able to put the ball in the net.”

The win is the third straight for the Riggers and sets them up for a chance to host a playoff game – but they’ll need some help next weekend. Should the Rush lose against the Colorado Mammoth in their final game of the season, the Roughnecks would move into second place and host a playoff game in round one.

Regardless of what happens, the Roughnecks are going to take advantage of the upcoming Bye Week and prepare physically and mentally for whichever opponent they’ll receive.

“We’ve been fortunate in having a pretty healthy group here,” said MacRae. “I think it’ll be good for us to rest up those bumps and bruises a little bit. We’re just going to watch some film and really get prepared. We’ve got to take advantage of the time off. We’re going to be in town, so coach will put us through the wringer pretty well and get the lungs going, but we’re hoping we’re going to keep this rolling into the playoffs.”