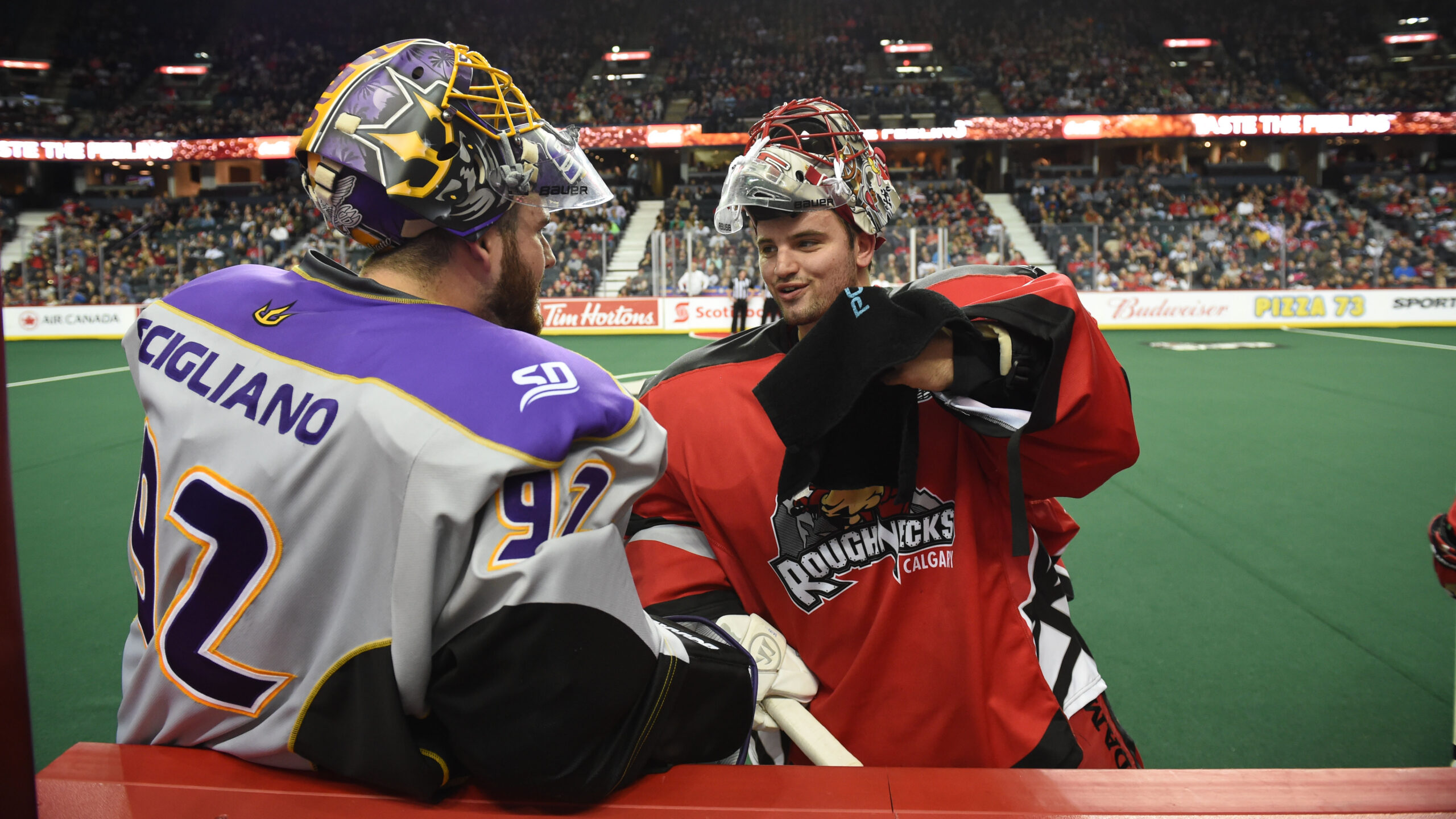 The student has become the master.

“It’s awesome,” Del Bianco said of the big win. “Whenever you can get a win at home and a win in general, it’s a lot better than losing – to say the least.

“It was a pretty awesome experience to face Frank. I grew up watching him, actually. Then I played with him and never had the opportunity to play against him until now.”

Del Bianco and Scigliano spent parts of three seasons together in Calgary and have formed quite the friendship over that time.

But, with the NLL expanding, Scigliano was subjected to the Expansion Draft and was selected in the sixth round by the Seals in July.

“It’s weird,” admitted Del Bianco. “But at the end of the day, I think we saw this day coming at some point down the road because we’re both intense competitors.”

Despite no longer being teammates, the two Coquitlam, BC, natives keep in close contact and shared in some friendly banter leading into their first ever match up.

“I text back and forth with him all the time,” Del Bianco said. “I’m good friends with Frank and we’re probably going to go for drinks this weekend. You just want to win that mental battle, get into the other guys ear.

“There was a lot of chirping throughout the week leading up to the game joking about who would owe who a drink. It’s nice to come out on top in that friendly rivalry.”

Del Bianco even took to Twitter prior to the game, offering up a wager.

Going to be weird seeing the old man @Sciggs92 on the other side this weekend … Loser buys Thai Thai . pic.twitter.com/VZyPrrLmgI

And the playful retorts didn’t stop once the game began.

“It was neat,” remarked head coach Curt Malawsky. “They were joking back and forth by the benches and they were calm, I’m not sure the same could be said about the coaches. It’s great to see the respect and the admiration they have for each other. They built a true friendship and a true bond.”

“I was kind of joking around with Frank when he came over,” explained Del Bianco. “I said, ‘C’mon man, let in one.’ Especially when he went on a run in the second, I didn’t know if we’d be able to score on him.”

With the game all squared up at four heading into the fourth quarter, the two goalies went back-and-forth making huge stops until the Riggers offence finally broke through.

For Del Bianco, he thrived on trying to match what Scigliano was bringing to the floor.

“I fed off of his big stops and I wanted to one-up him.”

“Especially in the fourth quarter, it’s a situation where the game is on the line and you can either rise or crumble and obviously, you want to rise.”

Calgary’s bench boss didn’t hold back the praise for his keeper after the game, noting his ability to hold down the fort and give his team the opportunity to pull out the win.

“What can I say about him, 35 is great,” said Malawsky. “Delbs made some outstanding saves, but his timely saves to keep us in the battle and to be able to take over in the fourth quarter, he’s the backbone back there. The guys played well around him, but when he needed to make them, he made them and the ones you don’t expect him to make, he makes as well. I thought he was exceptional again.”