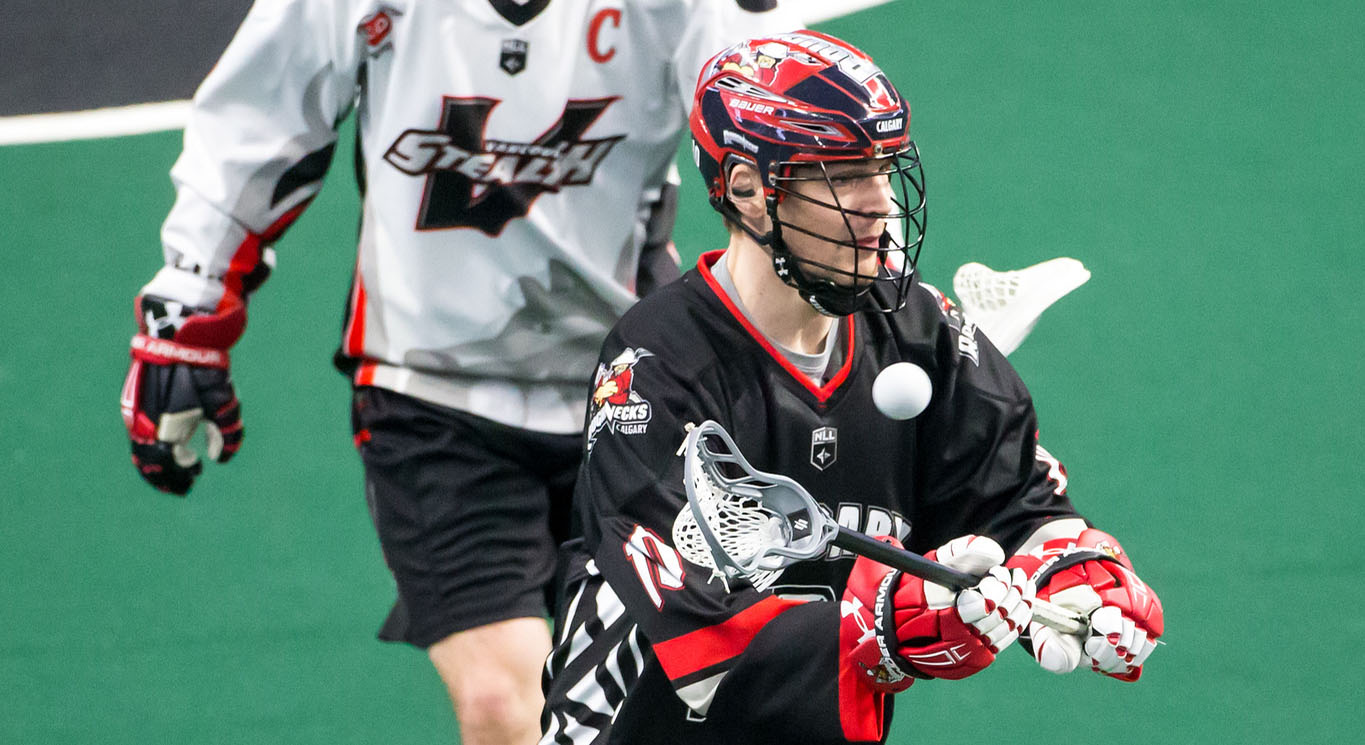 The Calgary Roughnecks are set to battle the Vancouver Stealth at the Langley Events Centre to begin their final road trip of the regular season. Game time is 8:00 p.m. MT.  Calgary is coming off last Saturday’s 16-9 victory over the Buffalo Bandits. Heading into the halftime break, the teams were knotted at seven goals each. The Roughnecks’ offence took off in the second half with a ten-goal run, turning the third quarter into a red light rally for the home team. Wesley Berg (1g, 7a) led the Roughnecks offensively with eight points while Holden Cattoni (5g, 2a) and Dane Dobbie (3g, 4a) were next with seven. Curtis Dickson (2g, 4a) was Calgary’s other top point producer with a pair of goals and four helpers. Mitch Jones (2g, 2a) and Dhane Smith (1g, 3a) led the Bandits with four points each while Jordan Durston posted a three-point effort for the visiting team. Vancouver is coming off last Friday’s 20-10 upset against the Saskatchewan Rush. The Stealth are on a two-game slide after defeating the Colorado Mammoth in a 13-12 decision on Mar. 24.

VS. VANCOUVER: It’s the final of four regular season match-ups between the two West Division rivals. The Roughnecks took the season opener in December by a score of 15-12. In their second meeting, Calgary nearly doubled the Stealth’s goals with a final score of 20-12. In their most recent battle, the Stealth led by a single goal heading into the halftime break but the Roughnecks went on an offensive attack in the second half netting seven goals while keeping the Stealth to just two. Curtis Dickson (3g, 5a) led the charge for the Roughnecks with eight points while Dane Dobbie (3g, 2a) was next with five.

Mar. 31/18 at VAN: CGY 13 VAN 9 … Early on, the teams kept it close, but Calgary came out with a strong offensive attack in the third quarter netting five goals to overcome the Stealth and clinch a spot in the 2018 NLL Playoffs.

PLAYOFF BOUND: With Calgary’s 13-9 victory over the Vancouver Stealth on Mar. 31 at the Langley Events Centre, the Roughnecks have clinched a playoff spot in the Western Division. Calgary will face off against the Colorado Mammoth in the West Division Semi Finals. Since their establishment, the Calgary Roughnecks have advanced to the post-season 15 out of 17 seasons.

COACH’S CORNER: Assistant general manager and head coach Curt Malawsky is the winningest coach in franchise history with 51 victories.  He passed Chris Hall’s mark of 46 in the team’s triumph over Colorado on Feb. 10.  Malawsky was first-named to the job in August of 2012.

HUMBOLDT STRONG: During last Saturday’s Fan Appreciation Night at the Scotiabank Saddledome, the Roughnecks saw 17,113 fans in attendance, which is the highest attendance this season. With the support of the fans, the Roughnecks were also able to set a new franchise record for the largest 50-50 draw with a $101,650 pot. The proceeds from the 50-50 totaling $50,825 will be donated to those affected by the Humboldt tragedy that occurred on Apr. 6.

THE ROAD AHEAD: Following tonight’s game, the Roughnecks will play their final regular season game on Apr. 28 when they travel to the Sasktel Centre to battle the Saskatchewan Rush.