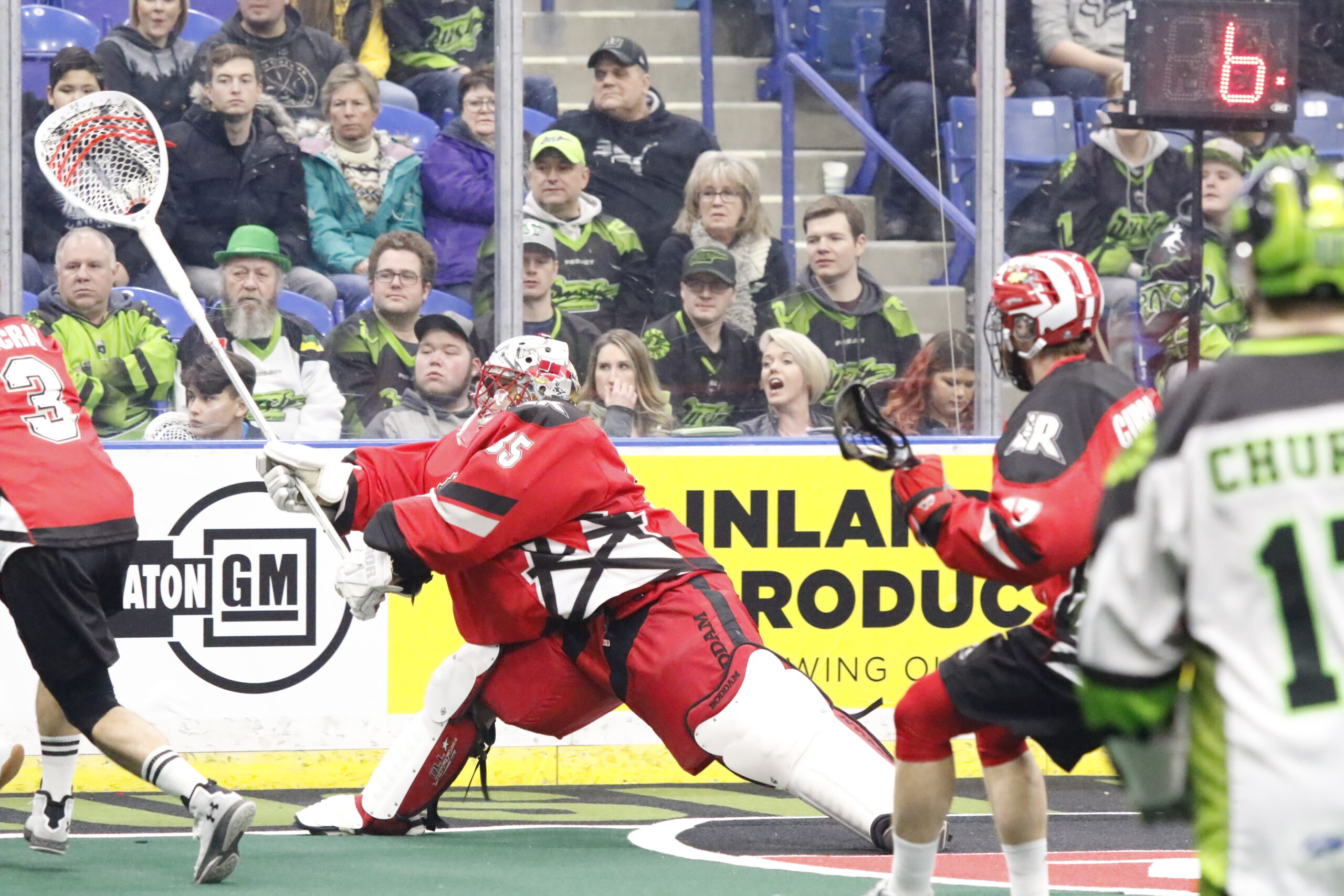 RIGGER RAMBLINGS: The Calgary Roughnecks are set to battle West-Division rivals the Saskatchewan Rush tonight at the SaskTel Centre. The Riggers are coming off a bye-week. They last saw action on Feb. 16 when they fell to the league-leading Buffalo Bandits by a score of 12-10 at the KeyBank Center. Calgary, leading 8-6 heading into the halftime break, was not able to maintain the advantage after six different Bandits found the back of the net in the second half while holding the Roughnecks to just two goals. It was a team effort for the Bandits as Steve Priolo (2g, 1a) and Dhane Smith (2g, 2a) netted a pair of goals each while eight other players got single markers for the home team. For Calgary, team-leading scorer Curtis Dickson (4g, 1a) recorded four goals while alternate captain Dane Dobbie (2g, 4a) and Rhys Duch (2g, 2a) followed with a pair of markers. Dan Taylor (1g, 1a) and rookie Shane Simpson (1g) rounded out the scoring for the Roughnecks. The Saskatchewan Rush are coming off last Friday’s 9-7 victory over the Colorado Mammoth.

VS. SASKATCHEWAN: Tonight marks the second of three regular season match-ups between the Roughnecks and Rush. The two clubs last met in Saskatoon on Feb. 9, 2019, in a contest that saw the Roughnecks defeat the Rush 17-12. It was their first ever win in Saskatoon after the Rush relocated there in 2016. The two teams don’t meet again until Apr. 20 when the Rush enter the Rough House for the first time this season.

SPECIAL TEAMS WATCH: Calgary’s power play is seventh in the NLL at 41.67% while the penalty kill is first in the league at 63.64%.

FAST FACTS: With 107 goals against in 10 games, the Roughnecks hold the lowest goals against per game with an average 10.70 markers.

ROUGHNECKS IN THE NLL TOP 10: Dane Dobbie is second in the NLL with 163 shots and 121 shots on goal. He is sixth in the league with 58 points including 24 goals (fourth in NLL) and 34 assists (tied for fifth). The forward is tied for third in power play goals with seven and is third in turnovers with 40…Rhys Duch is tied for seventh for power play goals with five and tied for eighth for power play assists with eight… Zach Currier tops the league with 22 caused turnovers while his 101 loose balls put him at second… Dan MacRae is tied for fourth for caused turnovers with 17… Curtis Dickson is tied for tenth with 27 turnovers… Chris Boushy is tied for sixth in rookie scoring with 14 points.

DÉJÀ VU: Alternate captain Dane Dobbie is closing in on the franchise’s all-time record of 416 assists, held by Jeff Shattler. Dobbie has 809 points (395g, 414a) in 170 games. Last season the forward became the franchise’s all-time leading scorer finishing the season with 751 points (371g, 380a) in 160 contests to surpass the previous mark of 684 also set by Shattler.

DEL BIANCO’S ASSISTS FOR KIDS: On Dec. 15, Roughnecks goaltender, Christian Del Bianco, and the Roughnecks Foundation proudly announced a new charitable program, Del Bianco’s Assists for Kids presented by Ascent Consulting Ltd. The partnership will see both Del Bianco and the Calgary Roughnecks Foundation direct $30 each while Ascent Consulting Ltd. donates $500 for every regular season assist recorded by the Calgary goaltender. In addition, Del Bianco is auctioning off his helmet on ElevateAuctions.com, which features the KidSport logo. Auction details will be communicated in the coming weeks. Del Bianco has already tallied six assists in 10 games during the 2018-19 campaign so far and looks to increase his point total throughout the remainder of the season.

THE ROAD AHEAD: After four weeks away, the Roughnecks return home for a two-game home stand starting on Mar. 9 when they host the Toronto Rock at the Scotiabank Saddledome. Game time is 7:00 p.m. MST featuring a halftime performance by the Drill Bits. Then on Mar. 16 the Colorado Mammoth visit the Rough House for the biggest St. Patrick’s Day Party in Calgary. Game time is 7:00 p.m. with an extended $5 Happy Hour from 5:00-7:00 p.m.