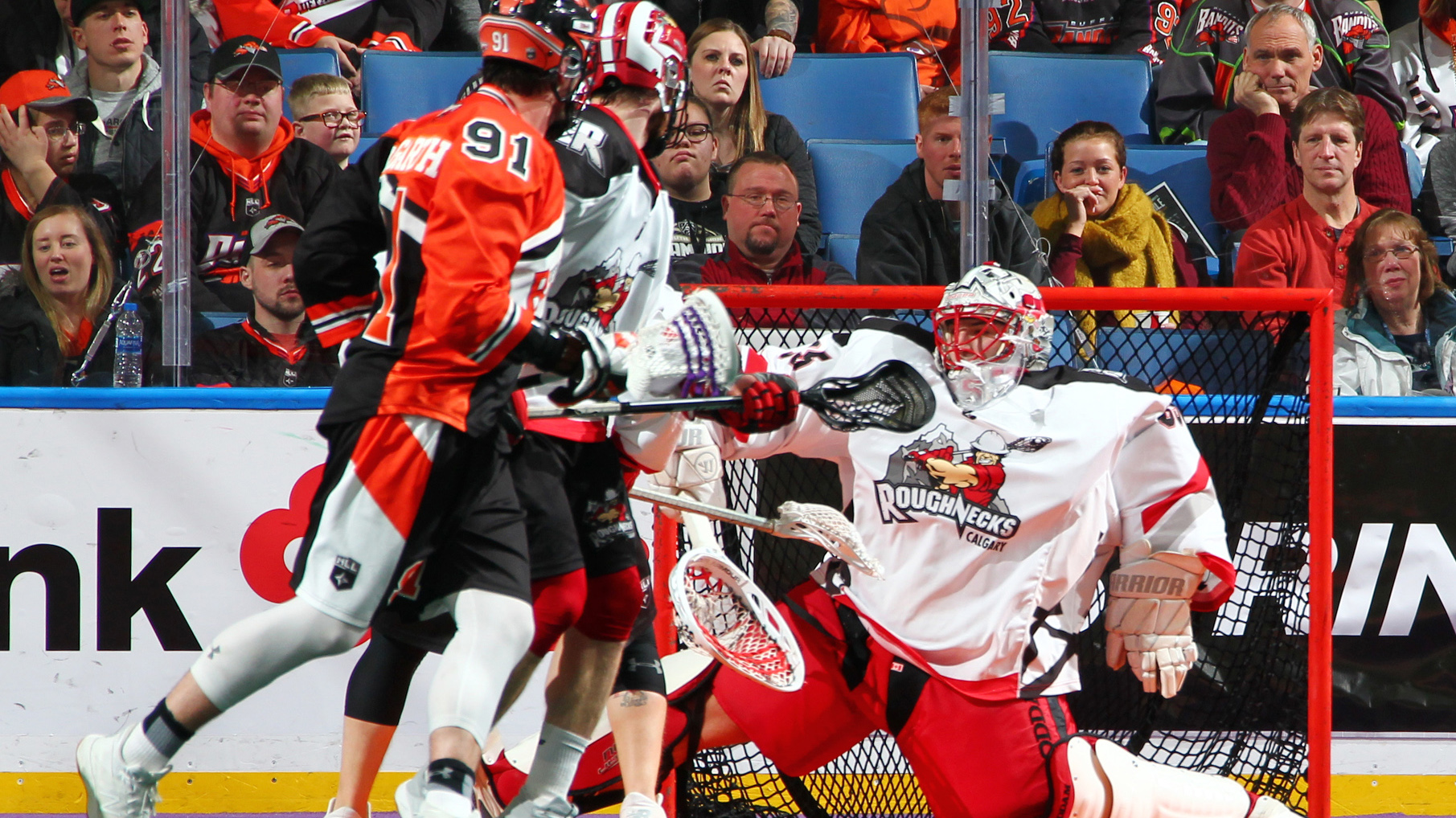 RIGGER RAMBLINGS: For the Calgary Roughnecks to capture their third National Lacrosse League championship title, they will have to go through the Buffalo Bandits. The Bandits host Game 1 of the best-of-three NLL final series tonight at the KeyBank Center. The series will then shift to the Scotiabank Saddledome on Saturday, May 25 for Game 2. If necessary, Game 3 will be back at the KeyBank Center on Friday, May 31. The Roughnecks punched their ticket to the NLL finals for the first time since 2014 following an 8-4 victory over the Colorado Mammoth last Friday at the Scotiabank Saddledome. Christian Del Bianco held the Mammoth goalless for 32.54 in a contest that tied the lowest scoring playoff game in NLL history. The Calgary goaltender made 47 saves to record his third career playoff win while Colorado’s Dillon Ward stopped 46 of the 54 shots he faced. Three Roughnecks tallied a pair of goals in the home victory including Jesse King (2g, 1a), Dane Dobbie (2g, 4a) and Curtis Dickson (2g, 2a). Tyler Pace (1g, 1a) and Reece Callies (1g) rounded out the scoring for Calgary, both with their first post-season goal. Eli McLaughlin (1g, 2a) led the Mammoth with three points while Ryan Lee was their top scorer with two goals.

ROUGHNECKS PLAYOFF TICKETS: Tickets are on sale now starting at $25 in the Student Zone, $29.52 for kids, $46.06 for adults and $32.99 for Rough House Reserved. Also available is the Family Pack for $115, which includes four tickets and a $20 food and beverage gift card. All prices are plus applicable taxes and fees and can be purchased through Ticketmaster.ca, CalgaryROughnecks.com or at the Scotiabank Saddledome Box Office.

VS. BUFFALO: Tonight marks the third time the Roughnecks and Bandits have met in the playoffs and the second time in the NLL Finals. The last post-season match-up against the two clubs was in the NLL championship game on May 7, 2004 in front of a sold out crowd at the Scotiabank Saddledome when Calgary took home the Champion’s Cup after a 14-11 victory. Buffalo last won the Cup in 2008 when they defeated the Portland LumberJax 14-13. The Bandits finished the 2018-19 regular season with a 14-4 record and are 5-0 when playing opponents from the West Division. Top-seeded Buffalo is coming off last Saturday’s 12-8 victory over third-seed Toronto Rock.

POST-SEASON EXPERIENCE: Since their establishment, the Riggers have advanced to the post-season 16 out of 18 seasons and have an all-time post-season record of 19-17. Calgary has a combined 249 games of playoff experience.  Mike Carnegie and Dane Dobbie lead all Roughnecks players with 27 post-season games played.  Dane Dobbie also tops the team in playoff points with 125 (58g, 67a).

FIVE ALIVE: The Roughnecks won their first Champion’s Cup (now called the NLL Cup) on May 7, 2004 when they beat the Buffalo Bandits 14-11 in the NLL championship game at the Scotiabank Saddledome. Five years later on May 15, 2009, the ‘Necks downed the New York Titans 12-10 at the ‘Dome and hoisted the Champion’s Cup for the second time. Then in 2014, five years later, the Roughnecks had an opportunity to capture the league title against the Rochester Knighthawks. After splitting the two-game series, the Roughnecks fell short and dropped 3-2 in the mini-game tiebreaker.  Now five years following their most recent run for the cup, Calgary has a chance to capture their third NLL Cup in franchise history.

SPECIAL TEAMS WATCH: Calgary’s power play ranks fourth in the league at 48.86% while the Bandits power play is third in the NLL at 48.94%. When playing shorthanded, Buffalo holds a slight advantage over Calgary with 61.33% (first overall).  The Roughnecks’ penalty kill sits second at 60.76%.  Two Calgary snipers sit in the league’s top-10 in power play goals: Dane Dobbie sits second in the NLL with 12 while Rhys Duch is tied for third with 11. Corey Small leads the league with 14 man-advantage markers while Shawn Evans is tied for fifth with 10.