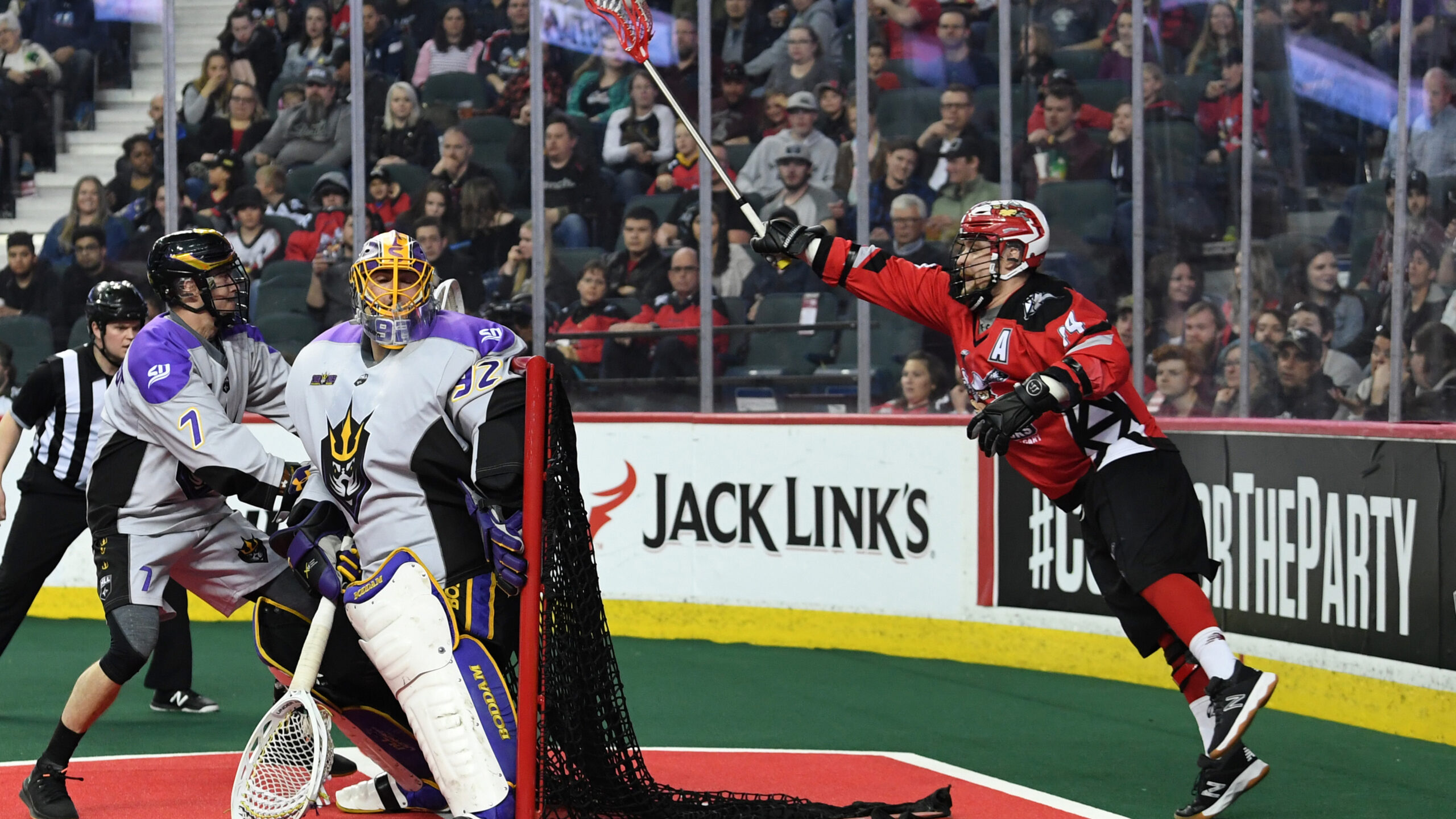 RIGGER RAMBLINGS: Tonight the third-seed Calgary Roughnecks will open the 2019 NLL Playoffs against the second-seed San Diego Seals in the West Division semifinal at the Pechanga Arena. The Roughnecks finished the regular season on a three-game winning streak culminating with an 18-8 victory over the Saskatchewan Rush on Apr. 20 in front of a sold out crowd of 19,289 at the Scotiabank Saddledome. An eight-goal first quarter propelled the Roughnecks to a 14-5 lead heading into the halftime break. Calgary added four more markers in the second half to take the series 2-1. It was the first series win over the Rush since 2013. Dane Dobbie (4g, 4a) led the point parade for Calgary in his second consecutive eight-point showing. Tyler Pace (4g, 2a), Jesse King (2g, 4a) and Curtis Dickson (1g, 5a) all notched six points in the victory. Mark Matthews (1g, 5a) paced Saskatchewan with six points.

VS. SAN DIEGO: Tonight marks the first post-season meeting between the two West Division rivals. Calgary took the series opener on Dec. 28 by a score of 9-5. Then on Jan. 18, San Diego brought down the Roughnecks 15-9 and on Mar. 30 the Seals defeated the Roughnecks 16-9 to best Calgary 2-1 in the series. San Diego wrapped up the regular season with an 18-7 loss to the Buffalo Bandits last Saturday.

POST-SEASON EXPERIENCE: Since their establishment, the Riggers have advanced to the post-season 16 out of 18 seasons. Calgary has a combined 212 games of playoff experience.  Mike Carnegie leads all Roughnecks players with 27 post-season games played.  Dane Dobbie tops the team in playoff points with 112 (53g, 59a) in 25 games.

PLAYOFF RECORD: Calgary has an all-time post-season record of 17-17. This will be the first playoff matchup against the Seals and the Roughnecks. Calgary is 0-1 when playing in the Pechanga Arena this season while their record in the Saddledome is 1-1 against their West Division rival.

THE POWER OF NINE: Dating back to the start of the season, the Roughnecks and Seals have now met on three occasions with Calgary scoring nine goals in each regular season game. Even though San Diego led at the half in all three matches, the nine markers were enough to secure a win on one occasion.

SPECIAL TEAMS WATCH: Calgary’s power play ranks fourth in the league at 48.86% while the Seals’ power play is fifth in the NLL at 47.67%.  When playing shorthanded, the Roughnecks hold the advantage over San Diego at 60.76% (second overall).  The Seals penalty kill sits fifth at 53.95%.  Two Calgary snipers sit in the league’s top-10 in power play goals: Dane Dobbie sits second in the NLL with 12 while Rhys Duch is tied for third with 11. Casey Jackson and Austin Staats lead the Seals with eight man-advantage markers.

TOP OF THE CHARTS: Dane Dobbie leads the NLL with 115 points including 47 goals and 68 assists (both ranked second). He also leads the league with 216 shots on goal and with 292 shots… Eli Salama leads all rookies with two shorthanded assists… Christian Del Bianco has played more minutes than any other goaltender in the NLL with 1074.44. He has a league-leading 716 saves.

DEL BIANCO’S ASSISTS FOR KIDS: On Apr. 20, Christian Del Bianco and the Roughnecks Foundation, in partnership with Ascent Consulting Ltd. directed $14,180 to KidSport Calgary through Del Bianco’s Assists for Kids program. As part of the program, both Del Bianco and the Calgary Roughnecks Foundation each contributed $30 for every regular season assist recorded by the Calgary goaltender, while Ascent Consulting Ltd. donated $1,000 per assist. The 21-year-old Port Coquitlam, BC product finished the 2018-19 NLL campaign with 12 assists. Additionally, Del Bianco auctioned off his game-worn helmet from the 2018-19 season featuring the KidSport logo which raised $1,460 for the program.

ROUGHNECKS VIEWING PARTY: The Calgary Roughnecks are excited to invite fans to the first-ever Roughnecks viewing Party at the Bank and Baron P.U.B. to watch tonight’s West Division Semifinal against the San Diego Seals. The FREE party starts at 8:00 p.m. with the National Lacrosse League pre-game show. Fans will have the opportunity to meet Roughnecks defenceman Bob Snider, alumnus Geoff Snider and members of the Roughnecks Drill Crew. Attendees can take photos at the Roughnecks photo booth and will be eligible to win a variety of prizes including a team signed jersey, vouchers for the 2019-20 Home Opener and more. It’s Wing Night at the Bank and Baron P.U.B. with 25 cent wings and $5 beverage specials including pints of Toolshed and 5oz house red and white wine