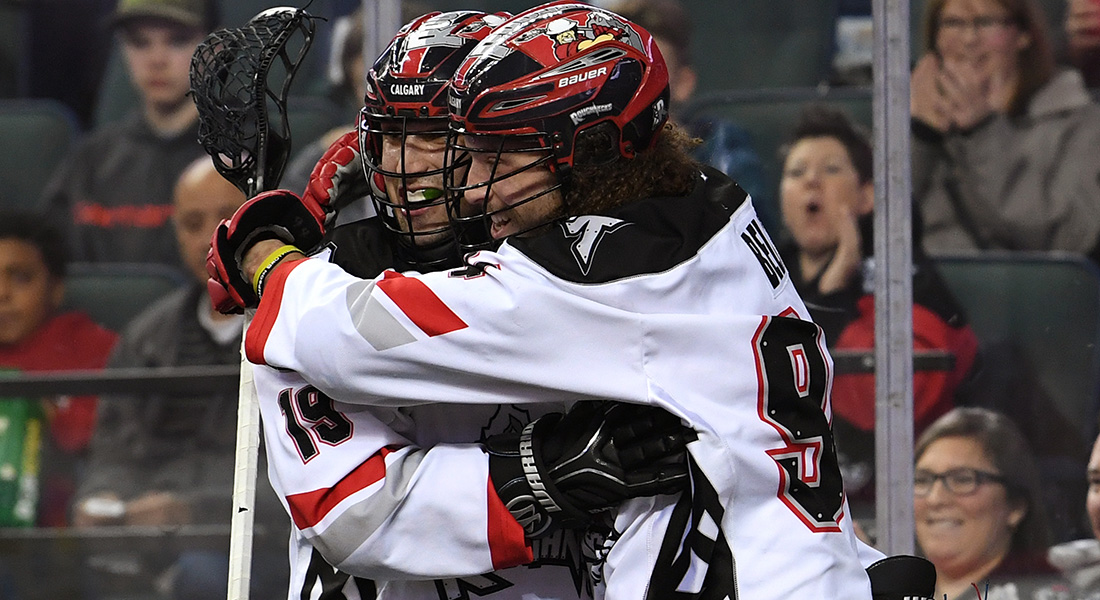 The Roughnecks won their third straight game in style, clobbering the Vancouver Stealth 20-12 Friday night at the Scotiabank Saddledome.

“I’ve had a couple [games like that], none anywhere close to that in the NLL, it’s good to kind of break out and have a good game like that,” said Cattoni. “Unfortunately for Vancouver, we got on a role and I was a part of that and it’s good that everyone chipped in.”

Curtis Dickson (4G+3A) and Wesley Berg (3G+4A) each had seven points and Tyler Pace had a hat trick and a pair of helpers.

“We spread it around, offence was great tonight. Obviously, missing our quarterback Dobbie out there tonight and that hurt us, and we knew we had to pick it up for him,” said Dickson. “The shots were falling for us, we were playing well.”

Chad Cummings scored the first goal of his NLL career and Christian Del Bianco made 48 saves and added three assists as the Roughnecks improved to 4-5 on the season.

“It was nice to see Chad get one, for sure, it’s his first so it’s a big deal,” said assistant coach Rob Williams. “Everybody had a piece of it.”

Neither team could find the back of the net early before the Stealth broke through with a powerplay goal from Corey Small 9:33 into the first quarter.

The Stealth doubled their lead just over a minute later when a video review determined that Andrew Suitor’s foot was outside the crease when the ball crossed the goal line.

Dickson answered for the Roughnecks just 22 seconds after Suitor’s tally to make it a 2-1 game with an overhand shot that beat Eric Penney low stickside. Dickson added his second from the top of the crease 42 seconds later to tie the game.

Wesley Berg gave the Riggers their first lead of the night with just over two minutes left in the first, finding some space between the Stealth netminder’s shoulder and the near side post with an impressive behind-the-back shot.

Zach Currier made it a 4-2 game at 13:28 after a long pass from Christian Del Bianco sprang him on a partial breakaway.

Tony Malcom cut the deficit to one but Berg answered with his second of the night with 13 seconds left in the frame as the Roughnecks took a 5-3 lead into the second quarter.

Dickson completed the hat trick 2:57 into the second, picking up a pass from Del Bianco, running through the slot and beating the Stealth goalie to the nearside post.

Cattoni made it a four-goal game 41 seconds later, beating a Stealth defender to the net and putting it low.

Mitch Wilde finished off a two-on-one give-and-go with Cattoni to extend the Riggers lead to five less than a minute later.

Cattoni netted his second of the quarter 20 seconds after Wilde’s tally when Tyson Bell fed him a crease-front pass from below the goal line to make it 9-3.

Cattoni secured the hat trick at 8:26 of the second frame, finishing off another two-on-one with Garrett McIntosh.

With just under six minutes left in the half, Cummings took a ball in transition and used a Vancouver defender for a screen before going high glove side for his first-career goal.

Tyler Pace netted his second of the campaign with 5:32 to go in the half, faking a shot from the top of the crease before burying it.

Ryan Martel, getting into the lineup with Dobbie sitting, added his second goal of the year and the eventual game-winner with just under four minutes left in the second frame.

Brandon Goodwin ended the Roughnecks eight-goal run with under three minutes to play in the half, scoring the Stealth’s first goal in 12 minutes and 31 seconds as the Riggers took a 13-4 lead into halftime.

In the third, the Riggers picked up where they left off as Cattoni netted his fourth of the night with a low bouncer 87 seconds into the frame.

Small scored his second of the night at 4:27 to make it a nine-goal game. Brandon Clelland and Tony Malcom, with his second, helped the Stealth outscore the Roughnecks 3-1 in the third quarter.

Malcom completed his hat trick with the Stealth’s first shorthanded goal of the season 41 seconds into the fourth quarter to make it 14-8, but Dickson answered on the powerplay with his fourth of the night 48 seconds later.

Wesley Berg scored his hat trick tally at 4:24, collecting his own rebound and firing it home to make it 16-8. Rhys Dutch responded for the Stealth 23 seconds later before Clelland netted his second of the game with just under nine minutes left to play.

Pace got his second of the evening 39 seconds after Clelland’s tally, scoring on a breakaway off a long pass from Del Bianco. Cattoni scored his fifth under than a minute later and Pace completed the hat trick 18 seconds after that.

Loewen made 20-10 with his first of the game, beating Penney stick side from far out with less than six minutes to play. Small finished off the hat trick for the Stealth at 11:42 and added his fourth on the powerplay less than two minutes later as his team lost its fifth straight game.

The Roughnecks will aim for their fourth win in a row when they visit the Saskatchewan Rush on Feb. 24 at 6:30 p.m.

“We’ve got a big game against Saskatchewan next weekend and we’ll build from that, we just have to keep building,” said Williams. “It’s about improving every week, every shift and we’ve just gotta continue with that.”