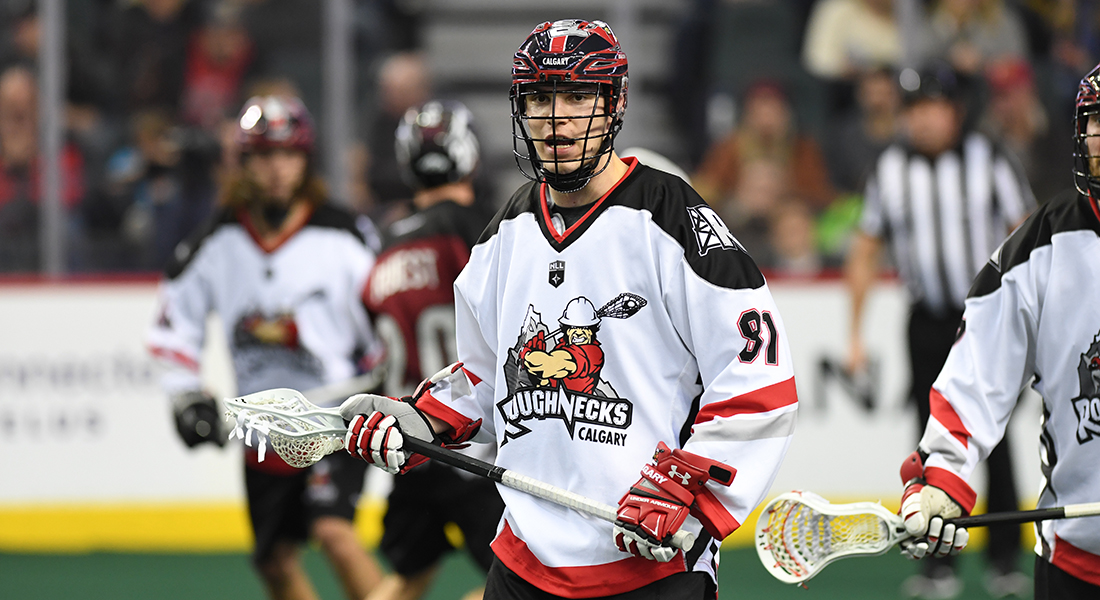 Now he’s being asked to help hold down the right side of the team’s defence.

“He’s been asked to do a lot more than we probably thought,” said GM Mike Board. “We haven’t been able to ease him in, we’re throwing him right into the fire. He’s going to make some mistakes, but he’s a sponge out there and he’s learning every game and he’s improving every game. On that front, it’s a positive. He’s a great kid, great in the room, pretty quiet, but he’s a good guy.”

The 19-year old from Maple Ridge, B.C., made his NLL debut on Dec. 29, when he was inserted into the line-up for the team’s third game of the season – against the Colorado Mammoth – due to injuries to veterans Greg Harnett, Bobby Snider, and Mike Carnegie.

He was informed he would get the start earlier in the week, but didn’t find out he would be on the floor for the initial face-off until he arrived at the Scotiabank Saddledome before the tilt.

“It was a surprise for me when I got to the rink on game day,” said Kalinich. “I didn’t know that I would be playing on the ball team. It was a good challenge for me to be out there battling with all of those guys, it’s a big part of the game. Helps get all of the nerves out, that’s for sure.

“It was a good experience getting into my first game. I’ve got a lot to learn still, but it was fun. I would have loved to get my first win, but it is what it is.”

The Langley Thunder product’s first experience in the Rough House came in the pre-season game, where he was on the field for the Riggers’ 13-5 win over the Vancouver Stealth.

“In the pre-season game, it was pretty loud, but in a real game, it was super loud out there,” Kalinich said. “Once I got my first shift out of the way, I was fine after that. But I was a little nervous and gripping the stick a little tight on the first one.”

After impressing his coaches with a strong performance against the Mammoth, they decided to keep him in the line-up heading to Buffalo.

Like many young players, he knows there are things to clean up in his game, but he’s happy with his performance and knows he can keep learning and improving with each shift.

“I made some mistakes, but that comes with every game,” admitted Kalinich. “I made some good plays, I thought I was aggressive on the cross-check, playing the body, which is what I do. I’m just going to keep working hard and learning from the vets, being a sponge and doing whatever I can to help out there.”

Kalinich was drafted by the Roughnecks in the second round (21st overall) of the 2017 draft. To the delight of the Calgary brass, he entered the draft early, after he officially renounced his college eligibility to make a push to play professional lacrosse.

And with room to grow, he can only get better as he continues to play valuable minutes for the Roughnecks this season.

“He’s a big, athletic kid who is really, really strong,” said Board. “He cross-checks hard and he pushes guys around down there. We saw that in his junior play — he’s only just 19 years old — and he’s still developing. He’s getting used to the speed and size of the game. Like a lot of our younger guys, he’s getting a chance to play because we’re as banged up as I’ve ever seen this team.”