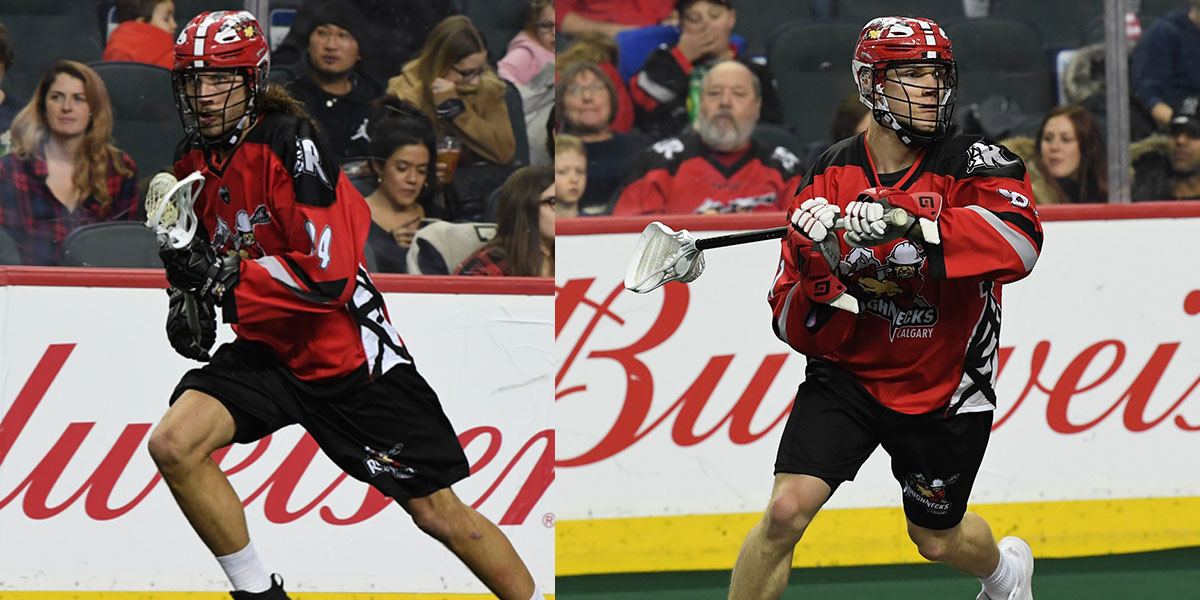 It’s the best way to summarize the feeling of sitting in a crowd among thousands of people supporting your child.

While Laura has seen Anthony play in the NLL while on the road near their home in B.C., this game marks her first in the league’s loudest barn – the Scotiabank Saddledome.

“When Anthony was telling me about playing at home, his words were, ‘it’s unbelievable,”’ she said. “He said that the noise and the crowd are just something you’ve never seen or heard before.

“I’m so excited to go and be there to give him that support. His sister is coming, too. Her and I have already got our Roughnecks attire ready: hats, toques, and shirts that Anthony bought us.  We’re ready to go; it’s going to be a good time.”

For Joanne, the upcoming tilt will be her second trip to the Rough House from her home in Ontario. Last year, she attended the Riggers’ boisterous St. Patrick’s Day Party.

It was a surreal experience.

“It’s loud, there were thousands of people there,” Joanne recalled. “I got emotional with the national anthem seeing him out there ready for the game. It was crazy, it was exciting.

“They have a great fan base, and it was great to be a part of it. We were up near the concessions, and to see people with your kid’s name on their jersey is a little overwhelming. But it makes me proud for sure.” She’ll have another family member on the floor at the game, too, but they’ll be in a Rock jersey. Toronto defender Latrell Harris is her nephew, and Bell’s cousin.

“Tyson’s aunt, myself, and his grandmother are all in town,” Joanne explained.  “It’s the normal rivalry between Latrell and Tyson when it comes to playing, they don’t say much they just go out and play, and deal with it after.

“But his aunt and I, we talk a little smack with each other.”

So there will be plenty of friendly competition in the stands.

But on the floor, it’ll be a different story.

Both Kalinich and Bell play fast, physical games. The fans love it, but for their mothers – it’s still taking some getting used to.

“It’s super strange,” said Laura. “Outside of the game he’s very quiet and well-mannered, but then once he’s on the floor it’s like he just turns into a different person. He’s a big boy and he has no fear, he’s always been like that.”

“It’s so hard because he plays a physical game,” Joanne added. “We always used to say to Tyson growing up ‘somebody is going to hit you back like that one day’, and I still don’t like it when it does happen, I don’t care if he’s 25 or not. But it’s part of the game.”

But what does make the big hits a little easier to swallow is watching their sons live out their dreams.

“Being able to come out here when I do is just a proud moment,” said Joanne. “To see him out there and his dreams come true and all the hard work paying off makes me so proud.”

“You’re so, so proud when they achieve something like this,” she said. “It’s amazing, it’s incredible – you can’t even believe it. Sometimes you have to pinch your skin to see if it’s really real. But I’m super proud of him, he’s worked so hard and he’s earned it.”

So have Laura and Joanne. This Saturday they’ll not only get to see the fruits of their son’s labour, but theirs, too.

“Right now, looking back, it was a blur, because you’re constantly juggling,” said Laura. “It was always like, get home from school, get dressed, we got to be there! Hurry up get in the car! It was hard work, but we did it.”

“It’s certainly a dedication with any kid going into a travel team,” Joanne agreed. “Dedication for the time it takes to go there, but it’s also a financial burden when you’re gone every weekend. But we had great family support.