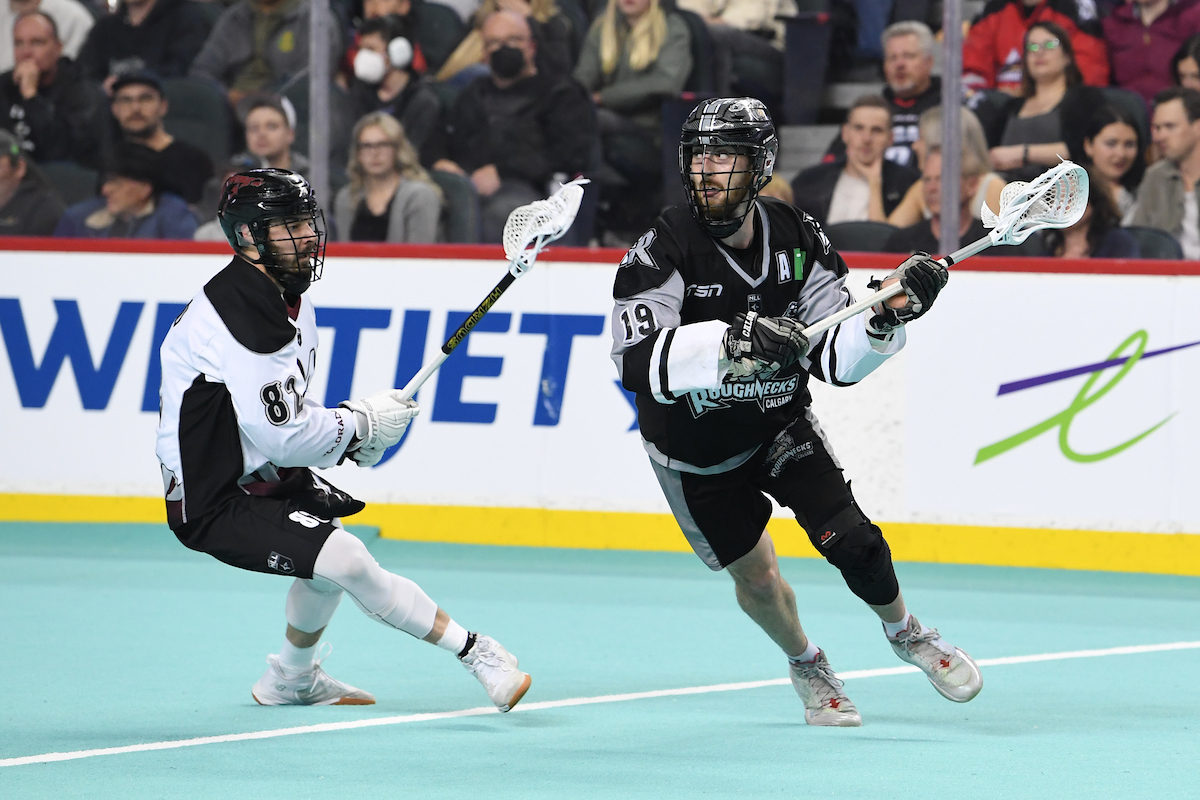 Curtis Dickson took matters into his own hands in the first half at the Rough House on Saturday night.

Dickson scored six goals – his second sock trick of the season – and added two assists in the opening 30 minutes of the game and the Roughnecks hung on for a
thrilling 14-11 win over the visiting Colorado Mammoth in front of 15,891 spectators during Fan Appreciation Night at the Scotiabank Saddledome.

Thanks to the victory, the Riggers earned a home playoff game next Friday night on WestJet Field at the ’Dome (7:30 p.m.) against the Mammoth once again.

By virtue of their 10-9 road win over the Vancouver Warriors on Friday, the San Diego Seals locked up top spot in the West Division. The Seals, Roughnecks and Mammoth all finished with 10-8 records, but end the season ranked first, second and third respectively due to head-to-head tie breakers.

Dickson scored two of Calgary’s goals in the first quarter, while Tyler Pace had the other as the ’Necks and Mammoth were tied 3-3 through 15 minutes of play.

The man they call Superman then tallied the first four goals of the second quarter to give him five in a row and six overall in the contest. Pace and Jesse King also got in on the action with back-to-back goals to extend the home side’s lead to 9-3 heading into the halftime break.

Zach Herreweyers, Haiden Dickson and Pace then found the back of the net in the third quarter as the Riggers outscored the Mammoth 3-2 to extend their advantage to 12-5.

The Mammoth staged a furious comeback in the fourth quarter as they fired six straight goals to pull within one, but Eli Salama secured the victory when he picked up a loose ball before sprinting into the Colorado zone and depositing the ball into the empty net.

Mitch Wilde added another empty netter with 1.1 seconds left to send the fans into a frenzy.

“The big thing I liked is we started well. We played really well in the middle of the game and then there was adversity at the end and we hung on. We’re not taking any negatives out of it. They pushed us to the limit and that’s just NLL lacrosse. Not that we took some shifts off, but momentum can change really quick. Our guys bent, but they didn’t break. We’ve always been a resilient group in Calgary year after year.”

“You just see the guys are buzzing. It (fan support) makes such a difference. They’re so loud. You look at the anthem and they’re all standing up and I’m like, ‘Wow, this is one of the biggest crowds since the championship final game.’ It’s pretty awesome and absolutely makes a difference out there. I hope they come back next week.”

“I always say we’ve got the best fans in the league. I know everybody says that, but I think they proved it tonight. I know in the playoffs that they always get behind us. I think it’s a big advantage, but obviously it’s 60 minutes and the ball’s around and you’ve got to play the game in front of you. If it’s these guys (the Mammoth), they’re going to adjust and come back really hard, but I’d much rather be here than on the road, no question.”

“That’s a testament to (the fans). I’ve been a part of however many sold-out crowds here, and it never gets old. It’s incredible playing in this kind of atmosphere. They willed us to a win, for sure.” – Curtis Dickson

“Wardo’s (Dillon Ward) a world-class goalie, and sometimes you’ve just got to close your eyes and shoot the ball as hard as you can and hope it goes in. I’ve had some games where I’ve struggled shooting this year. I talked with Coach Curt mid-week, and he said, ‘We’ve got all the trust in you in the world – just shoot the ball and trust yourself.’ I did that, and it worked out for me.” – Dickson

“I don’t know the numbers, but it felt like there were more people here than the rest of the season, so It’s exciting to see that they’re engaged. Obviously we’ve had some ups and downs this year, but to have them come out and keep supporting us, we know next week’s going to be crazy and we’re fired up about it.” – Tyler Pace

The Roughnecks and Mammoth will return to the Rough House for a rematch – this time of a playoff variety – next Friday night (7:30 p.m.) on WestJet Field at the Saddledome.