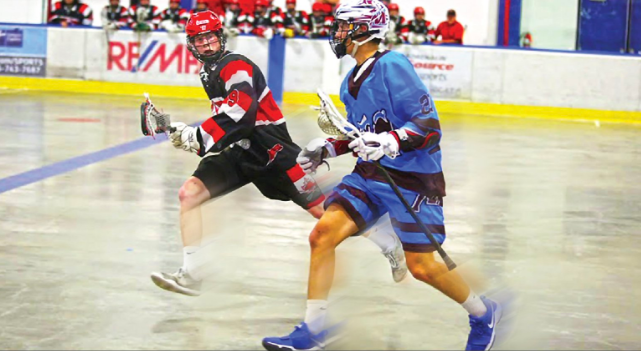 The 2018 Minto Cup junior A national championship gets underway Thursday at the Max Bell Centre with four teams battling for national supremacy.

“Anytime you walk up to Max Bell this week you’re going to find some good lacrosse being played,” said Roughnecks GM Mike Board. “I’d suggest that every team has at least one player with NLL potential.

“You’re looking at some of the best juniors in the country, and certainly the best teams who have earned the right to be here.”

The Raiders finished the 2018 regular season with an impressive 13-3 record, went 7-3 in the Rocky Mountain Lacrosse League playoffs, and took the provincial title after edging the Mountaineers 9-8 in Game 7 of the championship series.

Two-time league MVP and all time RMLL scorer Brett McIntyre led the Raiders in scoring this year with 41 goals and 73 points. The local phenom nearly matched his regular season count in the playoffs, scoring 22 goals and 71 points in just 11 games.

Other top scorers for the Raiders include Zach Mantei (33+26) and Levi Anderson (24+33), while starting netminder Jack Bruzell-Friesz boasted a 10.35 GAA with a .765 save percentage.

The Raiders are exceptional on special teams, scoring on 76% of their powerplays and killing 62% of the penalties against them.

The runner-up Mountaineers also had a solid campaign, finishing the regular season 10-6, and going 6-5 in the playoffs.

From the east, the Excelsiors were 14-6 in the regular season, and 11-3 in playoffs, winning the championship after taking their series against the Orangeville Northmen in five games.

Leading them is a silver medalist from the FIL World Field Championships in Jeff Teat, who tallied eight goals and 13 helpers for Team Canada in Netanya, Israel, in July. In the OJALL, Teat scored 40 goals and 112 points this season.

Clarke Patterson was also a big contributor for the Excelsiors with 33 goals and 97 points.

Last, but certainly not least, is the BC Junior A Lacrosse League champion Adanacs, backstopped by Roughneck Christian Del Bianco. The club went 18-2 in the regular season, and 7-2 in the playoffs, and they earned their 10th consecutive Minto Cup appearance by taking their final series against the New Westminster Salmonbellies four games to two.

Del Bianco – the BCJALL playoff MVP – had an impressive season with a 5.60 GAA, and .856 save percentage.

While he may not play on an Alberta team, there’ll surely be plenty of Del Bianco supporters in the building.

“Well, he’s part Calgarian because he plays here in the winter,” laughed Board, reassuring any Calgary fans torn on rooting for CDB and his Adanacs.

“It’s another opportunity for us to watch him, stay in touch, say hello, and watch him do his thing on the floor.”

Another silver medalist from worlds, Ryland Rees joins Del Bianco and the Adanacs on the floor for the Minto, he scored one goal, and scooped 10 loosies for Canada.

For a full schedule, broadcast information, and tickets click here.