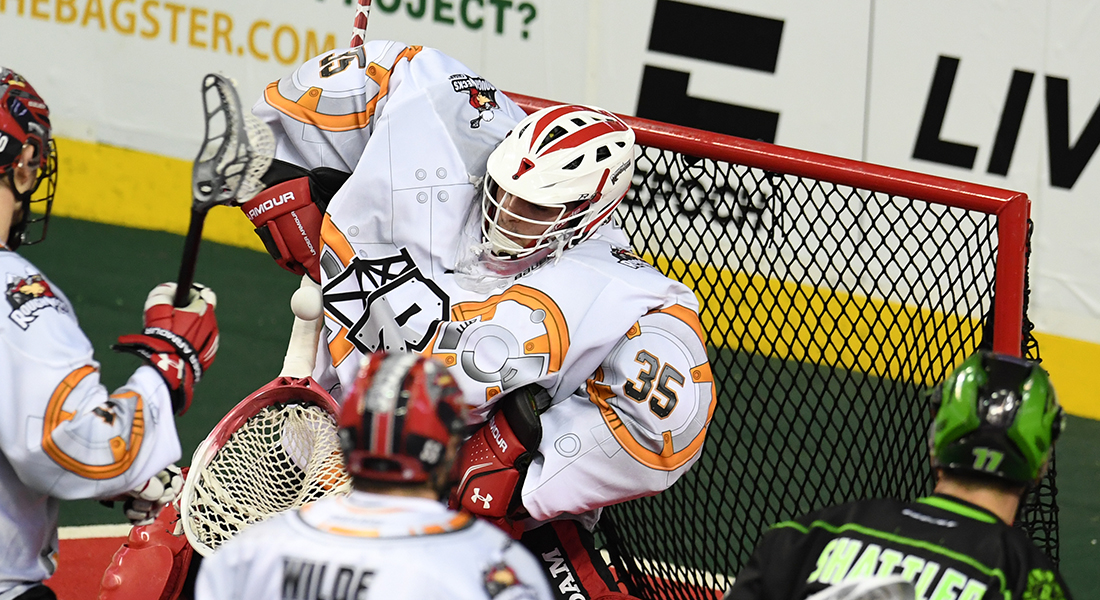 The Battle of the Prairies is set for its second installment this weekend as the Roughnecks head to Saskatoon to face off with their division rival.

Calgary and Saskatchewan met almost a month ago in a game that saw the Rush jump out to a 10-4 halftime lead. Whatever was said in the locker-room during that time must have been motivating, as the Roughnecks held the high-powered Rush offence to two goals the rest of the way to force overtime. Although the Rush came out with the win, the Riggers used that momentum to win their next three games.

That turnaround was led by the play of goaltender Christian Del Bianco, who has been lights out in net for the Roughnecks. Since taking over the duty between the pipes, he’s posted a goals against average of 10.00 and save percentage of .806%.

The Rush have continued to dominate since then, having lost just two games this season, the most recent setback coming on Feb. 17 at the hands of the Rochester Knighthawks, losing 16-11 at the Blue Cross Arena.

Dane Dobbie will return to the Roughnecks line-up after a one game absence due to a suspension resulting from an illegal cross-check from the last time these two teams met.

Coming off of an 11-point outburst against the Vancouver Stealth, Cattoni’s confidence is sky-high. He now has 26 points in his last four games. With Dane Dobbie returning to the line-up this weekend, Cattoni may not see as many touches, but he’ll be a scoring threat every time the ball ends up in his stick.

A powerful force in the offensive zone, Church is a problem for all defences, especially when the Rush have a man-advantage. He had a league-leading 21 powerplay goals last season and has five already this campaign. But not only can Church find the back of the net, he’s proven to be a great passer this year, registering 35 assists in 10 games. Sitting second in NLL scoring, Church will be a player to observe carefully this weekend.

The Roughnecks need to play a clean game against the Rush, because if they find themselves in a special team’s battle, it won’t bode well. The Rush currently boast the league’s top powerplay unit and one of the top three penalty-kill groups. Even with the bitter rivalry between these two clubs, Calgary needs to be level-headed, stay out of the box and play with the speed and confidence that has led to three straight wins for them.