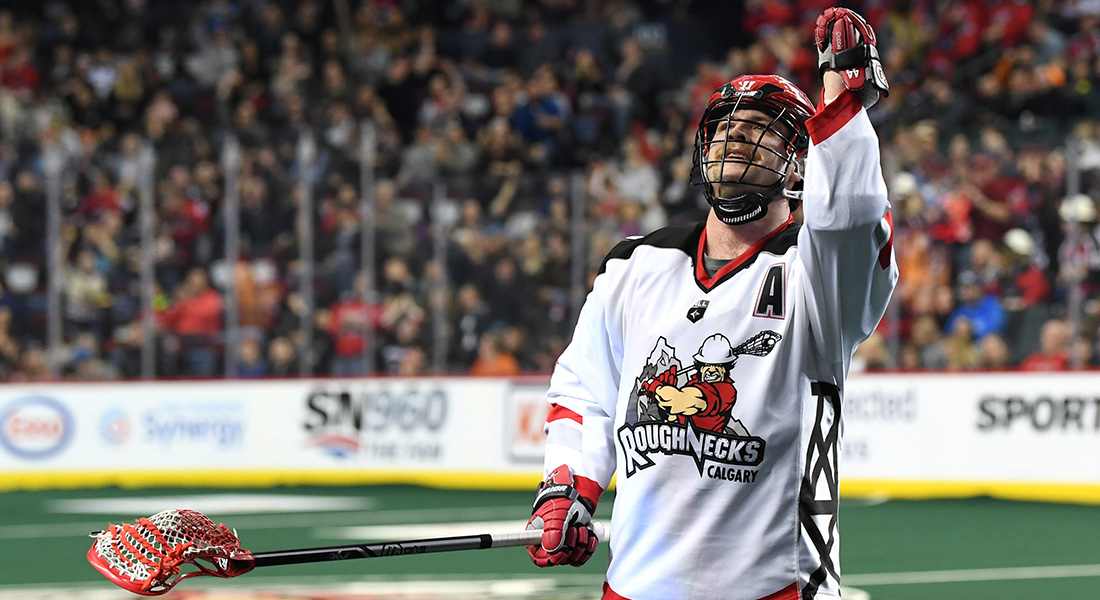 For the first time this season, the Roughnecks are on a winning streak.

Dane Dobbie became the first Roughneck to reach 700 career points and Curt Malawsky became the winningest coach in franchise history as the Riggers beat the Colorado Mammoth 13-9 for their second straight win Saturday night at the Scotiabank Saddledome.

“We’ve talked about it the last three or four games that we just want to continue to get better,” said Malawsky. “That’s one heck of a team with one heck of a goaltender out there. We knew we had to be our best with some key areas that we needed to make sure we focused on going into the game that we called the keys to the game and I thought the guys did a great job with them.”

The victory gives Malawsky 47 wins as the Riggers head coach, surpassing the late great Chris Hall, who led the Roughnecks to a 46-42 record from 2002 to 2007.

Getting his second start in as many games, Christian Del Bianco outdueled one of the league’s top goalies in Dillon Ward, making 51 saves to secure the win.

“Overall, it’s not one stop. It’s guys soaking shots, guys scoring the big goals,” said Del Bianco. “It’s a game of runs and if you can stay with it and battle through, it pays off in the end.”

After surpassing Jeff Shattler as the Roughnecks all-time points leader in a 13-12 overtime loss to Shattler and the Saskatchewan Rush on Jan. 27, Dobbie had a first-half hat trick and added three assists against Colorado to reach the 700 point milestone.

With Colorado trailing 9-4 in the opening minutes of the fourth quarter, Mammoth forward Stephen Keogh scored to spark an offensive back-and-forth. A few minutes after Keogh’s tally, Curtis Dickson, Jacob Ruest and Holden Cattoni all notched their second goals of the night in a span of 68 seconds.

After two goals by the Mammoth, including a hat trick tally for Ruest, Dickson completed his own hat trick with three minutes left to play. Dobbie collected an assist on the goal for career point #700. He added a shorthanded empty-netter with 21.5 seconds left to play for his 701st.

“I’ve played offence for 11 years on this team and I’ve played with a lot of fantastic players, the players that are in the rafters right now,” said Dobbie. “They got me a lot of points and they taught me the ins and outs of this league and taught me what it’s like to be a pro.”

Wesley Berg opened the scoring 5:05 into the first quarter, faking a shot before twisting back to beat Ward high stick-side at 9:54.

Dane Dobbie restored the Riggers lead with a shorthanded tally in the opening minutes of the second quarter. After a pair of Colorado defenders swarmed Riley Loewen in front of their net, Dobbie scooped up the loose ball and lobbed it over Ward for his 12th of the season.

The Mammoth made it 2-2 less than a minute later on a powerplay goal by Eli McLaughlin, but Zach Currier put the Roughnecks back on top 43 seconds after that.

Dobbie doubled the Riggers lead 6:16 into the second frame with his second tally of the night.

The Riggers all-time points leader completed his hat trick with six minutes left in the half, bouncing it through Ward’s legs to make it 5-2 for the home team.

“He’s a great goalie, you can’t get him off his game,” said Dobbie. “We had his number tonight but he had ours, he stoned us the last time we were here so we were lucky to get to him tonight.”

Ruest got the Mammoth to within a pair, pouncing on a high floating rebound after Del Bianco made the initial save. Cattoni and Dobbie both had goals overturned for crease violations in the final 1:10 of the half as the Riggers settled for a 5-3 lead heading into the third quarter.

The Roughnecks wasted no time at the start of the second half. Dickson took a pass from Berg behind the net, ran out and beat Ward 1:52 into the third before Cattoni made it 7-3 just 31 seconds later.

Mitch Wilde made it a five-goal game with a breakaway beauty near the six-minute mark, fooling Ward with a shot that looked to be going high but ended up beating the Mammoth ‘tender five hole.

Noble scored his second of the night with just under three minutes to play in the third to make it 8-4, but Currier buried his second less than 30 seconds later to restore the five-spot.

McLaughlin scored his second powerplay goal of the game after Dobbie’s empty-netter to round out the scoring.