Riggers Fall to Rush in OT 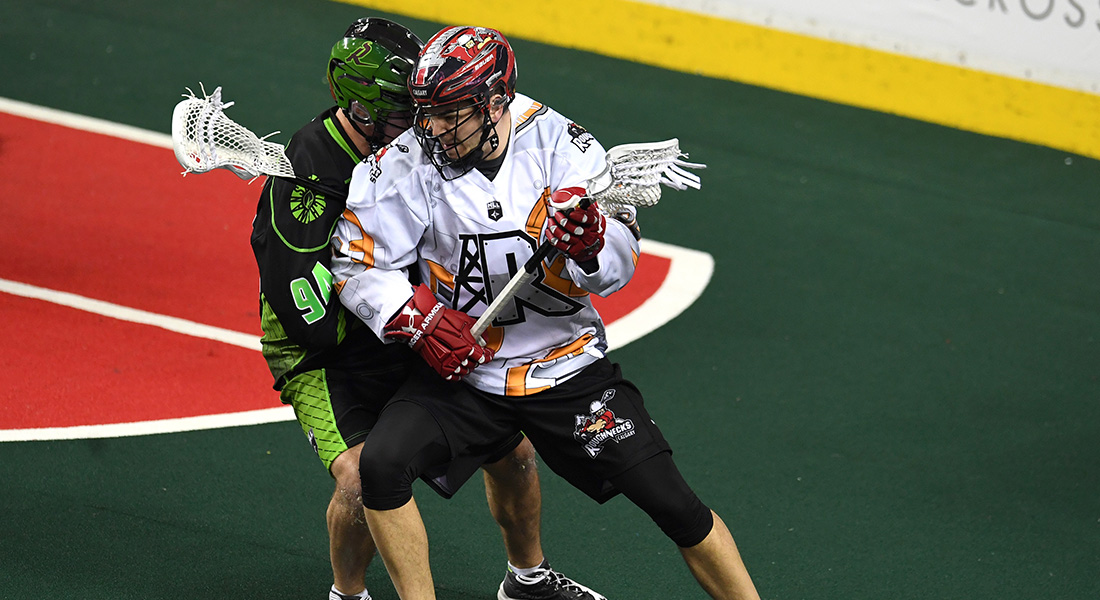 Like Luke Skywalker taking the wise teachings of Yoda, the Roughnecks adhered to the advice of coach Curt Malawsky in the second half of their narrow 13-12 overtime setback to the Saskatchewan Rush.

Trailing 10-4 after two quarters during Saturday’s Star Wars Party at the Scotiabank Saddledome, the Roughnecks outscored the Rush 8-2 in the second half to force the extra session.

“We talked about trust, we talked about belief, we talked about playing together and then we challenged the guys with the blood and guts at the half at 10-4 and we 8-2’d ’em in the second half,” said Malawsky after the disappointing loss. “We played an amazing game.”

Unfortunately for the Riggers, Ben McIntosh scored 46 seconds into OT to give the Rush (5-1) the victory.

“I think that was the one negative of the night was the outcome of the game,” Malawsky said. “I thought we played outstanding. When things were going a little sideways there, they stuck to the process and that’s a testament to the guys in the room – believing in each other and believing that they can get the job done.”

Curtis Dickson led the way for the Roughnecks (1-5) with five goals and an assist, while Dane Dobbie scored twice and set up five others.

“He told us to believe,” said Dickson in regards to what Malawsky told the team during his halftime speech. “The game’s never over. We showed a heck of a lot of heart there in the second half, but when you get yourself in a (10-4) hole, that’s pretty difficult to get yourself out of. “If we can find a way to put a better start in, we’ll have a different outcome. That’s something we’ve got to figure out.”

All Dobbie needed was to record three points to surpass Kaleb Toth in all-time points (684) for the franchise. Dobbie has now put up 689 career points in his 11th season with the Riggers.

“This means the world,” said Dobbie in regards to setting the record in front of 11,196 fans at the Scotiabank Saddledome. “I love this place.”

Holden Cattoni had a goal and five assist for the ’Necks, while Tyler Pace notched his first-career NLL goal for the Riggers and had three helpers.

Riley Loewen, Wesley Berg and Mitch Wilde also scored, while Christian Del Bianco made 29 saves in a relief appearance of Frank Scigliano to give the Riggers a chance to beat the top team in the NLL’s West Division.

McIntosh finished with two goals and two assists for the Rush as did Curtis Knight and Mark Matthews.

Shattler and Adrian Sorichetti had two goals and an assist each for Saskatchewan, while Ryan Keenan, Nick Finlay and Jeremy Thompson also scored.

Rush goalie Evan Kirk finished with 49 saves to pick up the win.

The Rush built up a 4-0 lead before Dobbie whipped a low shot past Kirk at 11:21 of the first quarter.

Shattler replied for the Rush 62 seconds later to give the visitors a 5-1 lead heading into the first intermission.

Dickson converted a feed from Dobbie for a power-play goal for the Riggers at 3:27 of the second quarter before Matthews, McIntosh and Keenan responded with three straight goals for the Rush.

Pace then bounced a shot through Kirk’s legs for his first career NLL goal at 11:41 before Dickson tallied his second goal of the contest 37 seconds later.

Sorichetti and Shattler rounded out the first-half scoring to put the Rush up 10-4.

Dickson completed his hat trick at 6:09 of the third to begin a stretch of six straight goals by the ’Necks.

Loewen, Wilde, Dickson and Berg accounted for the rest of the goals in the third quarter, in which the Riggers outscored the Rush 5-0.

Dickson continued his inspired play by tallying his fifth goal of the game 25 seconds into the final frame before Matthews replied to give the Rush an 11-10 lead.

Dobbie scored with 58.1 seconds remaining on the clock to tie things up once again when he took a pass from Curtis Manning before tucking a shot into the net over Kirk’s left shoulder.

The Rush will take on the Toronto Rock on the road next Friday before returning home to the Rough House on Saturday, Feb. 10 to host the Colorado Mammoth.

“Now we’ve got to go into the best in the East (Division),” said Malawsky of taking on the 4-2 Rock. “It’s a touch stretch for us.”