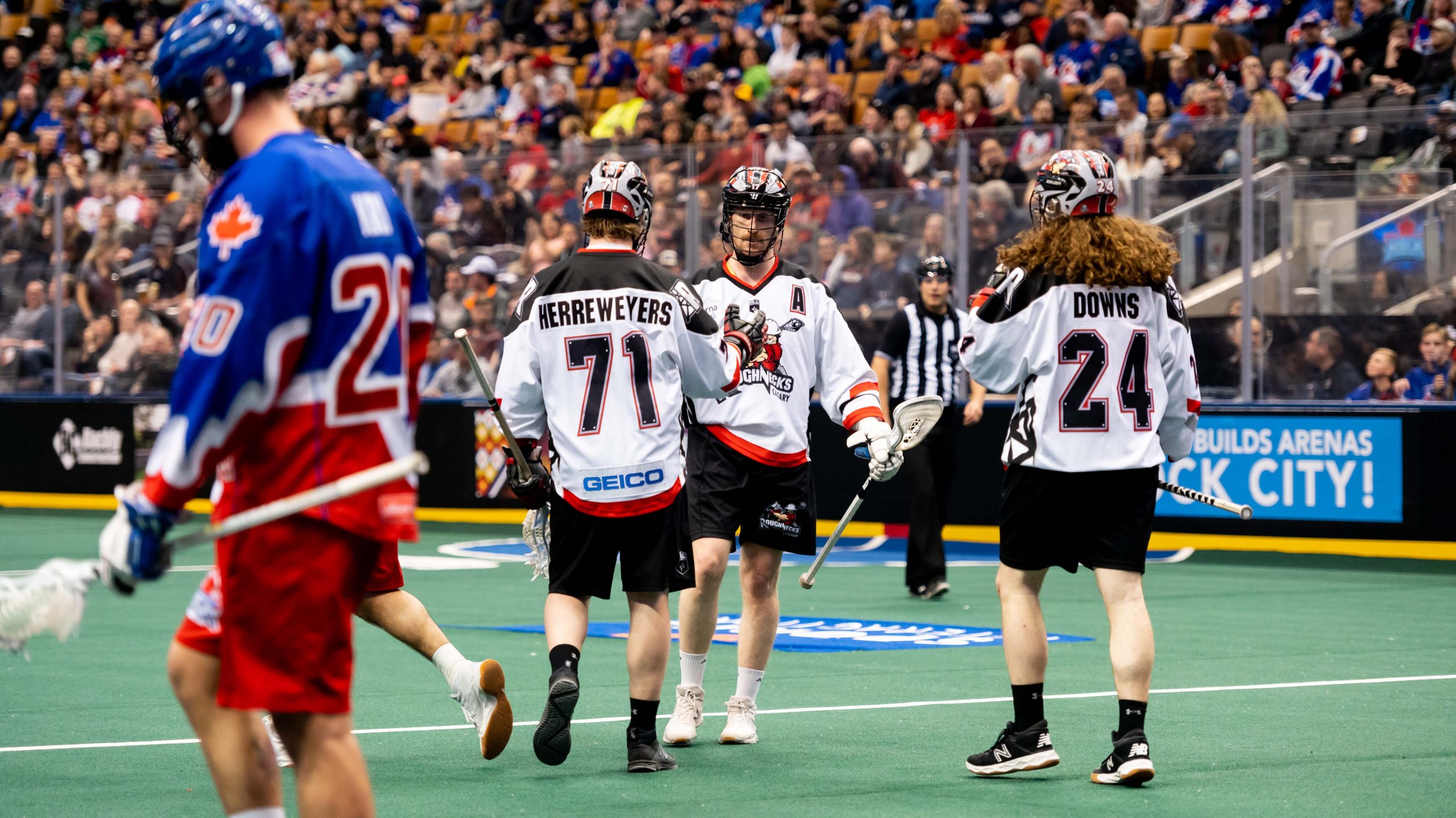 It was a full team effort.

All of that combined to be a 13-10 road win over the Toronto Rock at the Scotiabank Arena on Sunday.

Captain Dane Dobbie (1g, 5a) led the way in points with six, but it was not the play of one man that made the difference in the game. Calgary was moving the ball well on offence early on, with seven players finding the back of the net in the first half.

Rhys Duch (2g, 3a) opened the scoring for the Riggers, with Zach Herreweyers(1g, 1a) and Curtis Dickson (3g) adding a quick pair of goals to go up 3-1. After the Rock evened things up, Dickson, Dan Taylor (2g, 2a), and Mitch Wilde (1g) each lit the lamp to take a 6-3 lead. The teams would begin trading goals, with Dickson, Duch, and Dobbie picking up the tallies for Calgary, and head into the halftime break with a 9-7 lead.

After a one-point performance last weekend against the San Diego Seals, Dickson was on fire against the Rock, completing a first half hat-trick and having a goal negated due to coincidental minors.

In the second half, things slowed down offensively and the teams began to tighten up defensively and in net. Christian Del Bianco (45 saves) and his defence smothered the Toronto offence, allowing just three goals in the half and scoring one of their one.

With a two-goal lead in the fourth quarter, the Riggers were able to keep pace with the home squad, eventually capitalizing on a Shane Simpson empty-net goal as the Rock tried to claw their way back into the game.

“I thought in the face-off circle, that’s where the game was won or lost. The guys battled and competed for every inch and they had to fight for every loose ball or inch of the turf they wanted to get. It was up to the guys to decide if they wanted to do that and they did, so that was pretty special. As a defence, we stayed tight, finished our checks and made them pay the price when they got to the middle of the floor.”

“As I always say, we had our backbone in Christian Del Bianco. I thought that was his best game of the season and he made the big saves when we needed him.”

“It was nice to have the start we did offensively in the first half there to build ourselves a bit of a lead. I think we stepped of off the gas a bit in the second half, but our defence and Christian stepped up and locked it down. We were able to use possessions and eat clock to squeak it out there.”

“That’s the biggest thing with this defence and Nick; you have to get inside and penetrate. They like to play physical, pack it in and keep you to the perimeter. That’s where Nick thrives, he’s a good goalie, especially from the outside – he plays his angles well. The goal was to get inside and get high quality scoring opportunities. In the first half we did a good job of it and get the ball past him. We got away from that a bit in the second half.”

“That was big. We didn’t want to fall to 4-6 and be on the outside looking in. It’s a cliché, but we’re looking at every game like it’s a playoff game. Everything is a must-win. The West is going to go down to the final week, likely. We’ve got some big divisional games coming up and we need to create that separation in the standings. If we can get 60-minute efforts like we did today, we should find ourselves on the winning end of most of these games.”

The Roughnecks will be channeling the luck of the Irish next weekend as they host the Saskatchewan Rush for a St. Patrick’s Party at the Scotiabank Saddledome. The first 3,000 fans through the doors starting at 5:30 P.M. will receive vouchers for a free 14.oz Budweiser or Bud Light or regular pop as well as one free cheeseburger, hot dog or slice of pizza!