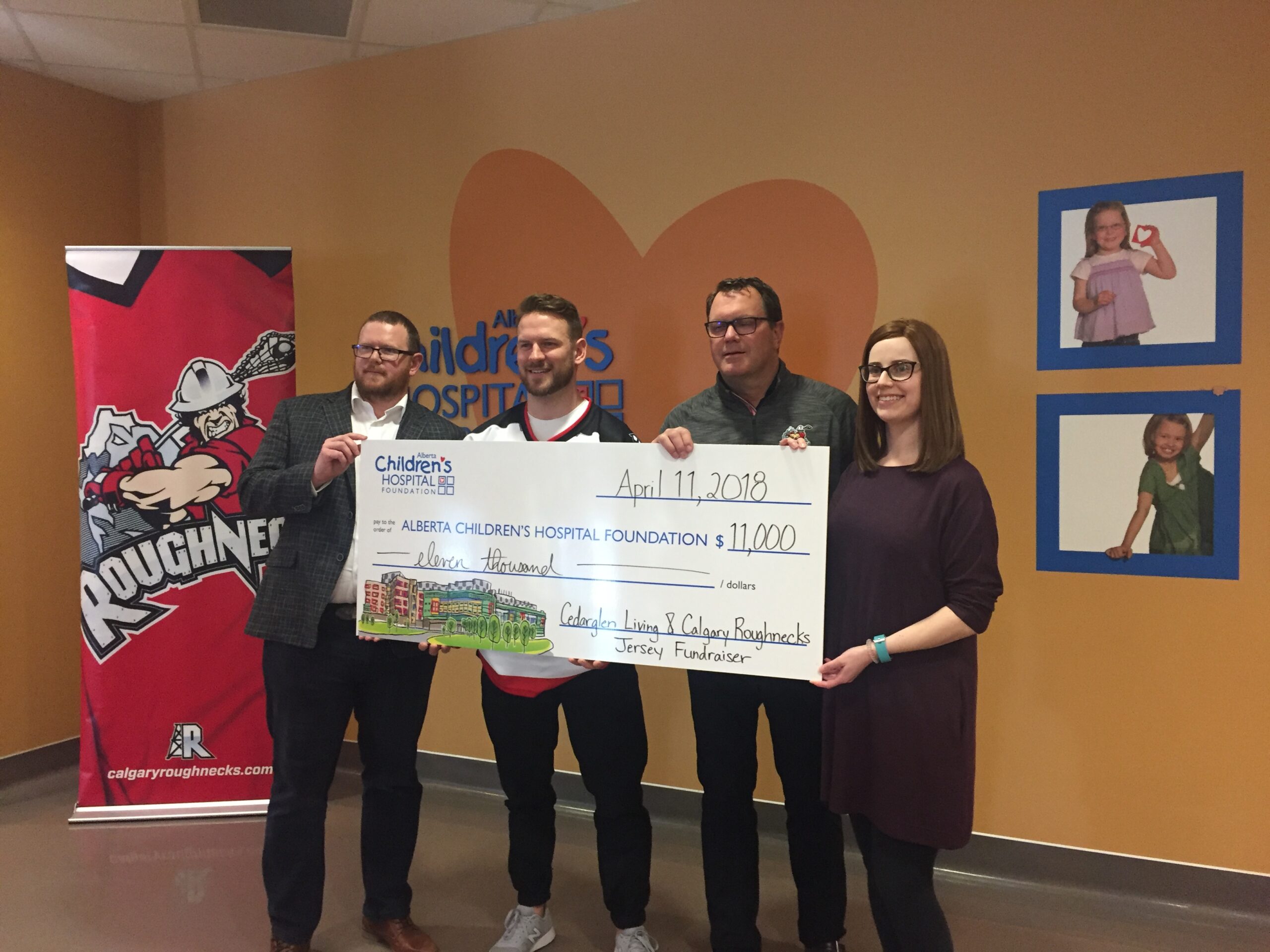 The Calgary Roughnecks Lacrosse Club, in partnership with Cedarglen Living, is proud to announce an $11,000 donation to the Alberta Children’s Hospital Foundation from funds raised through the St. Patrick’s Day-themed jersey auction held at ElevateAuctions.com. The Roughnecks donated $5,500 which was matched by Cedarglen Living.

The limited-edition jersey was true to the original jersey design, but featured a distinct Irish flare with the caricature’s outfit in the logo, the font of the name bars and shamrocks on the shoulders. This unique jersey made its one and only appearance of the 2018 National Lacrosse League season on March 17 when the Roughnecks hosted the Rochester Knighthawks in the team’s first St. Patrick’s Day Party presented by Cedarglen Living.

“Cedarglen Living chose the Alberta Children’s Hospital Foundation as their donation partner of choice in conjunction with the Roughnecks St. Patrick’s day game because our entire management staff, born and raised in Calgary, have benefitted from the great work the Alberta Children’s Hospital provides,” said Cole Haggins, president, Cedarglen Living. “I personally can speak to that as when I was a young boy I went septic with a burst appendix and my life was saved at the ACH.  Now that my staff and I all have young children of our own, we have our own personal experiences visiting the hospital, dealing with the amazing staff and benefiting from the high level equipment and pediatric expertise.  We are proud to have such a great organization in our city.”

The Roughnecks have been an active partner with the Alberta Children’s Hospital since 2015 through player appearances, autograph signings and donations.

“Being able to donate $11,000 from a jersey auction is incredible,” said Roughnecks defenceman, Bob Snider. “I want to thank our fans for supporting this auction which in turn will help many families get the medical support they need. We have a wonderful community here in Calgary and I’m proud to be a part of it.”

“The community really is the driving force between having a great hospital and having an outstanding hospital,” said Liz Ballendine, vice president of fund development, Alberta Children’s Hospital Foundation. “We are always grateful to see both sports teams and home builders collaborating to do something good for us. The money raised goes to equipment, research and family centred care. We need all the support we can get as 97,000 children come to the hospital each year.”