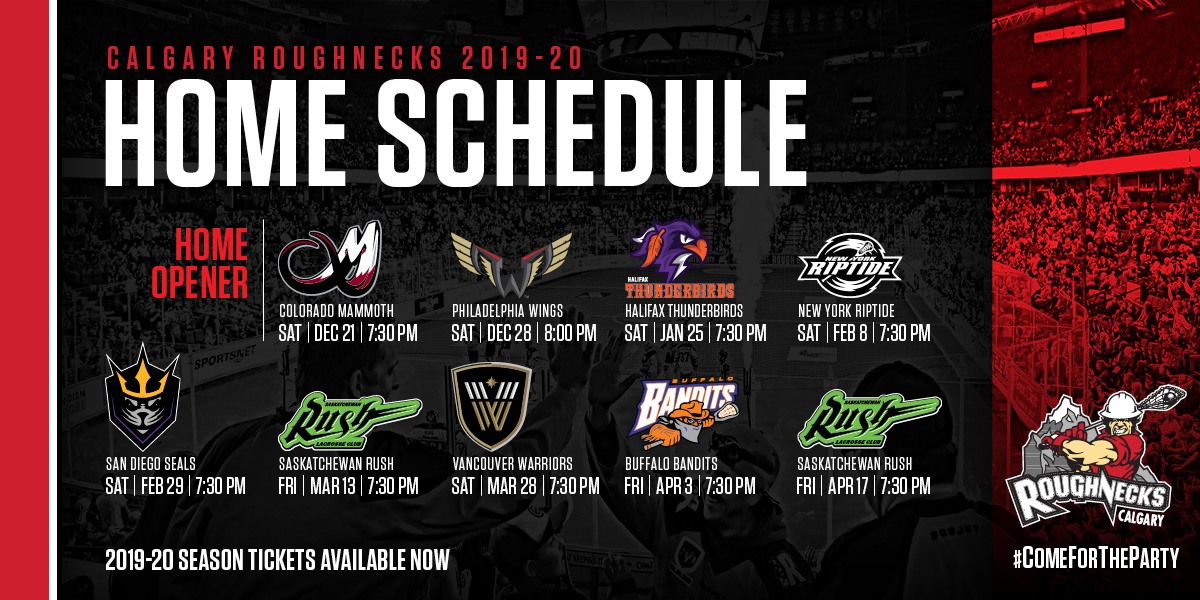 Calgary, AB – The Calgary Roughnecks today unveiled their 2019-20 National Lacrosse League regular season schedule. The defending NLL champion Roughnecks’ season will begin on the road November 29 as they face off against the Vancouver Warriors at Rogers Arena. The Roughnecks home opener is on Saturday, December 21 at the Scotiabank Saddledome. Game time is 7:30 p.m. MT.

Calgary will play 10 divisional contests over the course of the 18-game schedule, facing the San Diego Seals and Saskatchewan Rush three times each while meeting the Colorado Mammoth and Vancouver Warriors on two occasions.

The nine Roughnecks home games will be played on the weekend including three Fridays and six Saturdays. All home games are scheduled for 7:30 p.m. starts to accommodate broadcasts with the exception of December 28, which will have an 8:00 p.m. face-off due to Roughnecks team travel from San Diego where they play the previous night.

Calgary will meet the newly formed Knighthawks in Rochester on January 18 while hosting the second 2019 expansion team, New York Riptide, at the Saddledome on February 8. The Riggers will also welcome the new market Halifax Thunderbirds on January 25 for Maritimes Night.

The St. Patrick’s Day Party returns to the Rough House on March 13 versus the Saskatchewan Rush. Full details will be announced prior to the game.