ROUGHNECKS DOWN SWARM IN OT 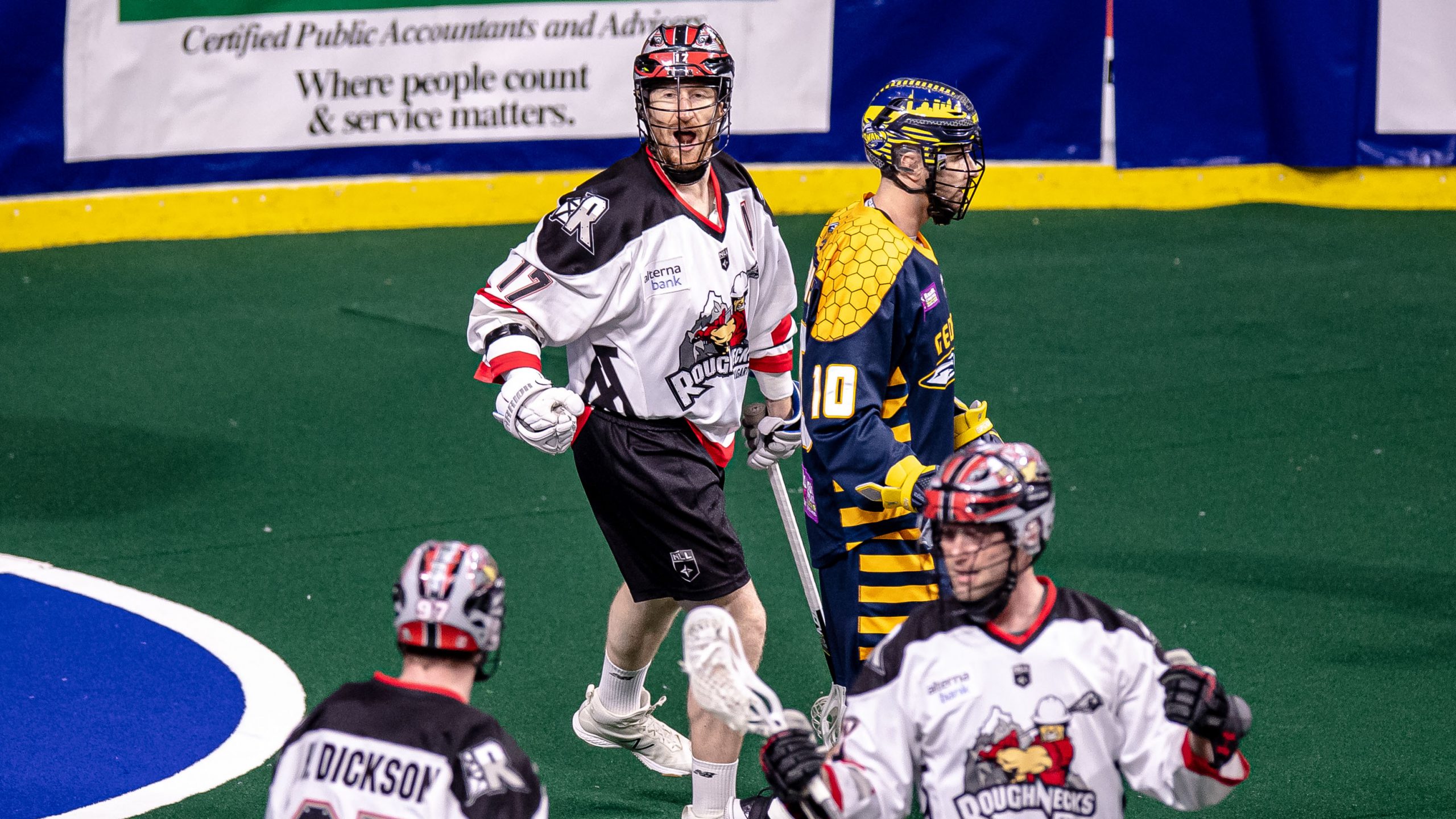 Dane Dobbie is back.

And in spectacular fashion, too.

Calgary’s captain put the exclamation mark on the Roughnecks 18-17 OT victory over the Georgia Swarm at the Infinite Energy Center.

Curtis Dickson (5g, 5a), Rhys Duch (4g, 4a), and Dane Dobbie (6g, 1a) were fantastic for the Riggers as they earned the franchise’s first ever win on the road in Atlanta.

It didn’t take long for the Roughnecks offence to go to work in this one, with Dickson finding the back of the net just 38 seconds into the contest. Dickson would add one more in the first quarter, with Dobbie and Duch also netting two apiece to give the Riggers a 6-2 lead after 15 minutes.

With his first goal of the night, Duch hit a significant milestone in his illustrious career – scoring his 400th career goal.

Georgia came out strong in the second quarter with a three-goal run, but Dobbie and Dickson responded by completing their first half hat-tricks to push the lead back to three. Zach Currier added a tally of his own just prior to the end of the first half, putting the visitors up 9-6 heading into the locker room.

Tyler Burton got things started in the second half with a clean face-off win and a clean rush down the floor for a goal just eight seconds into the quarter. Duch completed his hat-trick just minutes later. The Swarm took control through the remainder of the quarter, but would still head into the final frame down a pair, 11-9.

Calgary’s two-goal lead would evaporate quickly in the fourth quarter, but they would never allow the home team to hold a lead of their own. Going back and forth until the final buzzer, the two teams combined for 14 goals in the last 15 minutes, forcing sudden death overtime.

Early on in the extra frame, it was none other than the returning captain himself who was able to beat Swarm goalie Kevin Orleman to seal the win.

“Dan Taylor played great tonight. It’s tough for him; the ball goes through Dobbie on the left side. He was our guy on the left side for the last six games, so it’s a bit of an adjustment for him. He went back to his role as a power forward and he had a massive goal for us in the fourth quarter. He made a game-winning play with Dobbie on the up-seal for the OT winner. He played really well tonight.”

“You can’t quantify it. Dobbie says the right things at the right times, he leads by example, he calms the group down, and he gets the group excited. He gives us the belief when the game is tied and when he gets the ball, we know he’s going to put the team on his back. You see Curtis Dickson and how well he played, those guys are just such good friends, and they feed off of each other. It gives us that dynamic duo up front. It changes everything.”

“We just never quit. That shows the resiliency of the Roughnecks. That’s who we are. When you have the bend but don’t break mentality, that builds belief. When you have belief, good things can happen to a team that believes.”

“I think it feels good to get two points. That’s the big one, to come down here and get a win, that’s what we were trying to accomplish. A back and forth game, that’s an entertaining lacrosse game and I think the guys played a full 60 minutes together and played well.” – Dane Dobbie on his return to the line-up.

“Stay in the fight. We had a lead, we let them on a five-goal run there and we could have dropped our heads and pouted and thought it was over, but we just kept with it and battled through. It was good that the guys stayed in it and battled to pull it out.” – Dobbie on the message to the team late in the game.

“I spoke about Dan last week, too. It’s guys like that that some people don’t recognize, but he deserves a lot of credit. He’s a big body and he creates a lot of room for me. Unfortunately I wasn’t able to get him the ball on a few tonight, but he makes plenty of room for me on the floor and allows me to get good shots.” – Dobbie on lefty Dan Taylor.

With the trip out east wrapped up, the Riggers will return home to the Rough House next weekend, hosting their rivals, the San Diego Seals on Saturday, March 13 (7:30 pm). Make sure to unleash your alter ego and dress up for Superhero Night presented by Pete The Plumber.