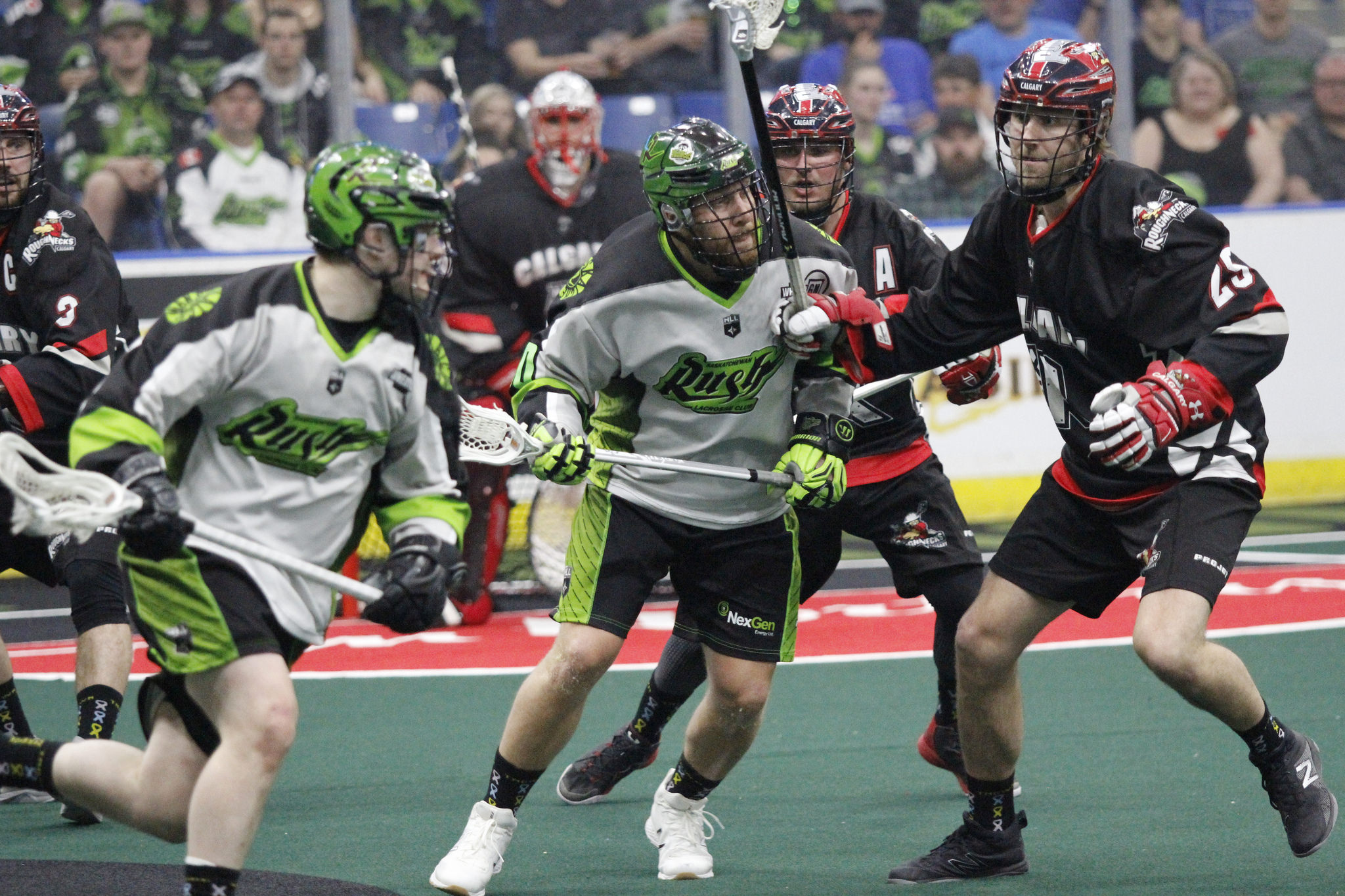 Despite a late rally, the Roughnecks were edged 11-10 by the Saskatchewan Rush at Sasktel Centre in Saskatoon on Saturday night.

Holden Cattoni scored his fourth goal of the game at 9:44 of the fourth quarter and Dane Dobbie added a power-play marker 55 seconds later to pull the Roughnecks (8-10) within a goal, but the visitors weren’t able to notch the equalizer to force overtime.

“Unfortunately we ran out of time,” said Calgary coach Curt Malawsky, who praised his players for erasing a 10-6 deficit to pull within a goal. “We battled back and that’s something that in the past it ends up 14-9. For us to battle back and have an opportunity to come within one … we showed good resolve and good character. It’s a testament to the guys.”

Cattoni also had an assist during Calgary’s final regular-season game as he surpassed the 100-point plateau in just his second NLL season.

“Honestly, at the beginning of the year if you told me I would have surpassed 100 points by the end of the year, I probably would have been pretty surprised, just based off the lackluster numbers I put up last year,” said Cattoni, who finished his sophomore NLL campaign with 36 goals and 76 points in 18 games. “It shows a lot of growth in my game and that I’m playing a bigger part for our team.”

The 23-year-old forward from DeWinton, Alta., added that the Riggers can take a lot of positives out of the close game against the Rush into their West Division Semi-Final affair against the Colorado Avalanche next Saturday at the Pepsi Centre in Denver.

“There no secret that they’re a very good team,” said Cattoni in regards to the Rush, who finished atop the West Division standings with a 14-4 record. “The fact that we can be right there with them and battle the full 60 minutes with them is important to us and shows us that we are where we need to be. We still have a bit of time to get better and hopefully we’re right back here in a couple weeks, but we’re not looking past next Saturday at all.”

Curtis Dickson had a hat trick and four assists for the Riggers, while Dobbie finished with a goal and four helpers.

Wesley Berg and Garrett McIntosh also scored while goalie Christian Del Bianco did his best to keep the ’Necks in the game as he stopped 32 of 43 shots fired his way.

“Delbs gives us a chance to win every night,” said Malawsky. “He’s got great presence in the net and great confidence.”

Ben McIntosh paced the Rush attack as he had four goals to go with two helpers, while former Roughneck Jeff Shattler scored twice and set up another.

Evan Kirk played well in the Saskatchewan net as he made 36 saves to backstop the Rush to victory.

Ben McIntosh and Shattler scored the only two goals of the first quarter for the Rush before Cattoni fired a long-range shot past Kirk 27 seconds into the second to get the Riggers on the board.

After Ben McIntosh scored his second of the game, Dickson took a breakaway pass from Del Bianco and lived up to his ‘Superman’ nickname by diving through the air while snapping a shot past Kirk.

Cattoni and Dickson then scored goals 76 seconds apart to give the visitors a 4-3 lead before Dinsdale replied to pull the homeside back into a tie.

After watching his younger brother score twice for Saskatchewan, Garrett McIntosh got in on the action by scoring a shorthanded goal for Calgary at 13:52 of the second quarter.

The Rush pulled even once again as Keenan fired a shot to the top corner over Del Bianco’s right shoulder with just 0.8 seconds remaining on the clock before the halftime intermission.

In front of their hometown fans, the Rush carried that momentum into the third quarter in which they outscored the ’Necks 4-1 to take a 9-6 lead.

Although the ’Necks tallied four of the final six goals in the final frame, they weren’t able to beat their West Division rivals for the first time this season.

The Roughnecks now have a week to prepare for the opening round of the playoffs. They’ll travel to Denver to face the Colorado Mammoth in the West Division Semi-Final next Saturday, May 5.

“Coming down the stretch, I think we got better every week,” Malawsky said. “This is a focused group. We earned our spot in the playoffs and now we have to go down there and earn the right to carry on.”