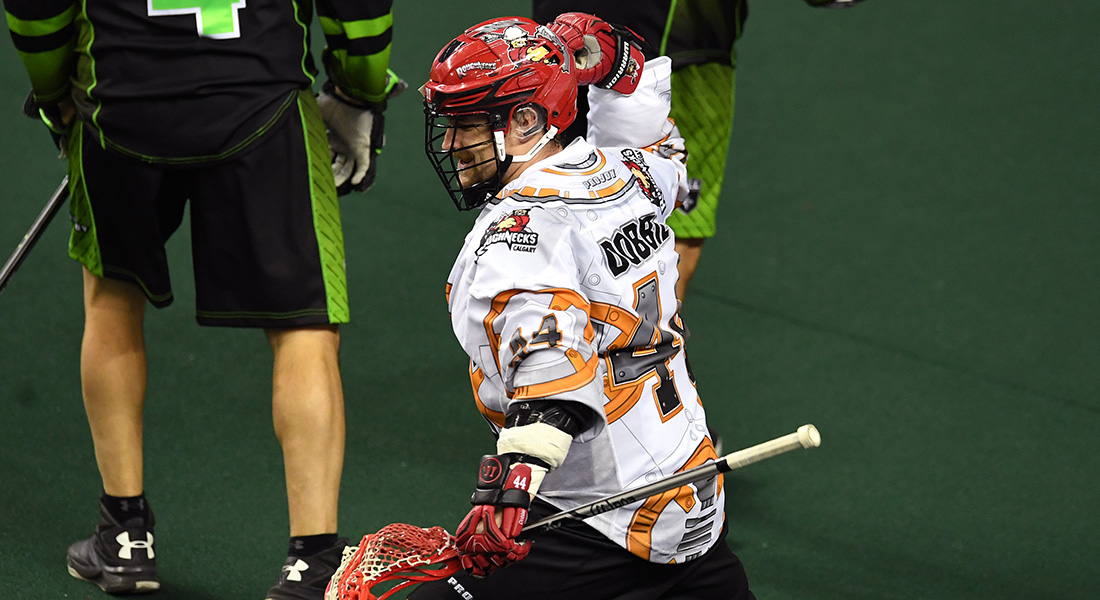 The Roughnecks fell 13-12 in overtime to the Saskatchewan Rush at the Riggers’ annual Star Wars Party, but Dane Dobbie led a comeback of galactic proportions, rewriting the Roughnecks history books in the process.

He finished the night with two goals and five assists for 689 career points — all with the Riggers — as his team battled back from a 10-4 halftime deficit to force the game past regulation.

“It’s special,” said Dobbie. “I’ve played 11 years here now and it is pretty cool to be able to stay in one spot. Family moved here, I had a kid here. I consider this place home now. We’ve got the best fans in the league, I love this city and I hope I can stay.

“I’m grateful to be a part of this organization for so long.”

Dobbie made his presence known early, engaging Rush defender Brett Mydske after a high hit on Riley Loewen and earning himself four minutes in the penalty box in the ensuing tussle.

The 31-year-old forward got his team on the board with just under four minutes left in the first quarter, rifling it home from just below the attack line for his seventh goal of the season.

“I think probably out of those close to 700 points, most of them are right inside the dirty area,” said coach Curt Malawsky. “He don’t float around, he don’t get a lot of second assists. He’s either right on the ball or he’s putting the ball in the net himself.

“We’re proud to have him as a Roughneck and I think this organization knows what he’s laid on the floor night in and night out. To have a guy to stand up to say ‘I’m your all-time point leader’, can’t be a better guy.”

With the Riggers on the powerplay early in the second frame, Dobbie fed Curtis Dickson for his 9th of the year. The assist moved Dobbie into a tie with Jeff Shattler for the most points in Roughnecks franchise history with 684. Shattler set the record at last season’s Star Wars Party and was on-hand to see his former teammate eclipse his mark, having signed with the Rush this past offseason.

“We talk during the week but when it’s on it’s on and that’s the way we’ve always done it when we played in the summers and stuff,” said Dobbie, who played 10 seasons with Shattler from 2008 to 2017. “We’re not friends on the floor but during the week we are.”

At 5:47 of the third quarter, Dobbie passed his former teammate’s record, earning the first assist on a goal from Loewen. With the home crowd chanting his name, Dobbie entered the offensive zone and made the pass to Loewen before having his stick knocked out of his hands. After Loewen scored, Dobbie raised both hands in the air as Dickson recovered the ball from the Rush net to ensure the new franchise leader had a momento to commemorate his 685th point.

“You hear the word ‘heart’ thrown around a lot, but I mean that guy, I can’t remember if I’ve ever seen him miss a game — he gets hurt, he’s banged up and he’s playing through injuries,” said Dickson. “He’s the epitome of a Roughneck and it’s pretty cool to get to see him break that record tonight.”

With the Roughnecks trailing 12-11 in the final minute of the fourth quarter, Dobbie saved his best for last. The Elora, Ont. native took a pass in front of the Rush net and soared through the air to bury his second goal of the night and 343rd of his career, drawing the Riggers even with 58.1 seconds left in regulation.

Though the Roughnecks ended up on the wrong side of the one-goal result, they turned in what was arguably their best performance of the season and pushed one of the league’s top teams to the brink.

“Our goal is to get better every game, it really is, and that’s what we pride ourselves on this weekend, we said we had to play better tonight that we did two weeks ago and I truly believe we did,” said Dobbie. “We fought hard tonight, we really did and if we keep getting better every game, we’ll be okay, we really will. We’ll start winning games and this group of guys believes in each other and hopefully we can pull it together.”