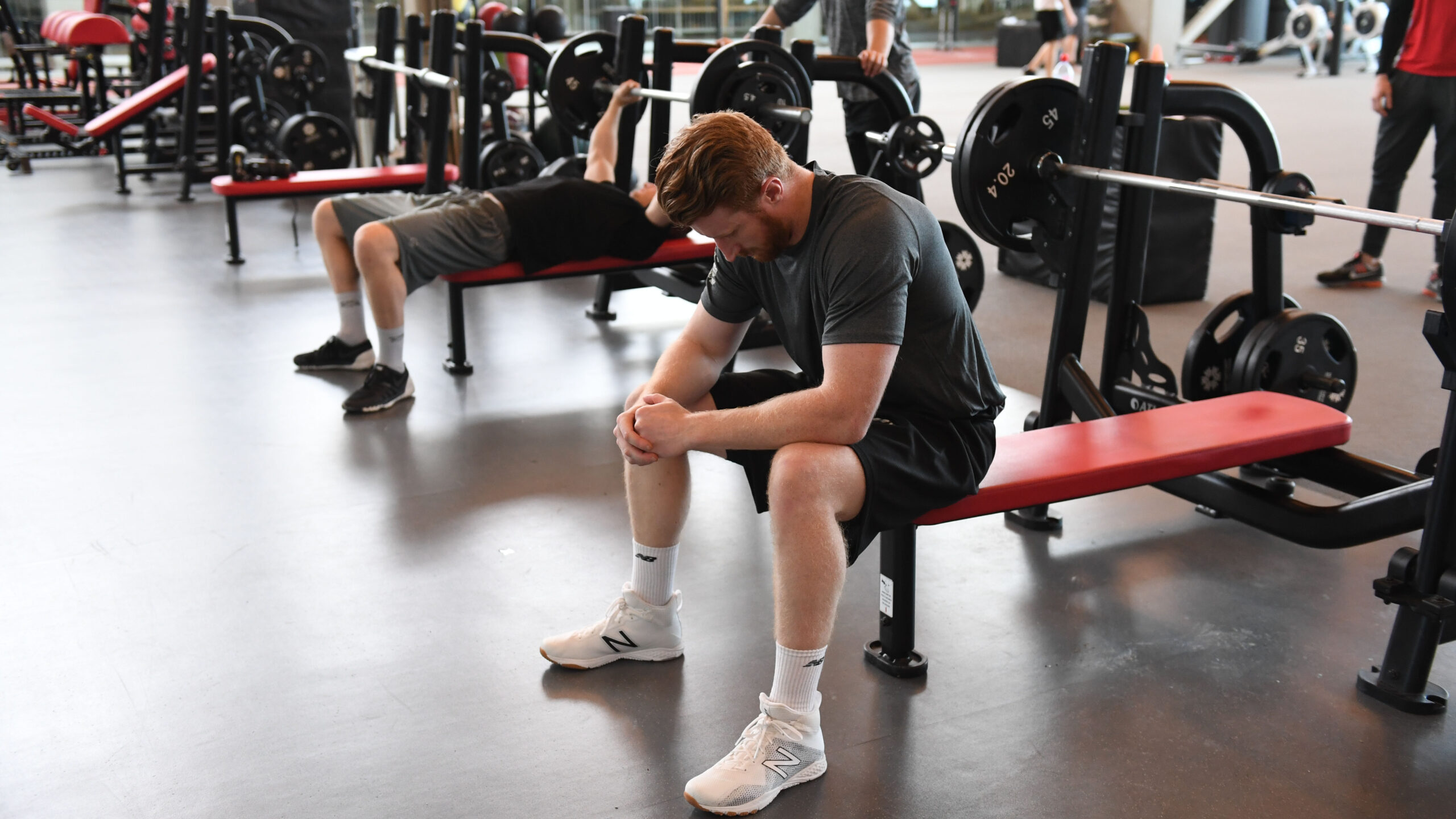 The Calgary native is a certified strength coach and personal trainer with more than 20 years of health and fitness experience, who has worked with hundreds of professional and elite athletes. Not only does Hope-Ross help guide the Roughnecks to their peak fitness, but he is also in his 18th season as Strength and Conditioning Coach with the Hitmen, and has also worked closely with the Flames and Stampeders throughout his career.

We sat down with Hope-Ross to find out exactly what it takes to train like a Roughneck.

1. What does the training schedule of a Roughneck look like?

It varies a lot, but the majority of them train three days a week in-season.

My ideal training plan for a Roughneck is a leg day with plyometrics on a Monday, upper-body on Tuesday, and then cardio and a full-body day on Wednesday.

However, a guy that plays a ton of minutes – like Curtis Dickson for example – his body is sore post-game, he’s not going to want to train again on Monday. So most players modify their program based on how they feel after a game weekend.

2. What are the main focuses for the Roughnecks’ training plan?

The main goals are to maximize overall strength, and to improve both aerobic and anaerobic capacity.

The whole idea is that even when they’re fatigued they still need to be explosive. It’s a mix of strength, cardiovascular fitness and flexibility.

3. What are your favourite types of exercise to achieve those goals?

Other great exercises are deadlifts, squats, and lunges. We also need to work on shoulder stability, since there are a lot of shoulder injuries in box lacrosse. And finally, back exercises for core stability, lateral pulldowns, chin ups, things like that.

4. How long is an average training session for a Roughneck?

With warmup, workout and cool down no more than 1.5 hours. A lot of people will spend three hours in a gym, but what kind of intensity do you have if you can train for three hours straight? The intensity level I expect for my athletes is they should be fried after an hour’s workout.

Also, from a physiological standpoint – if you’re pushing yourself hard for over 1.5 hours you’re just asking for injury.

The best way to divide your gym time would be a 20 minute warmup, 1 hour workout, and 10-15 minute cool down.

5. With that much time at the gym and on the floor, how do the Roughnecks recover?

Hydration is huge, I always preach to everybody – even people who aren’t professional athletes – to drink four liters of water a day.

And active recovery is important, the more you move the faster you’ll recover. A lot of guys take their first off day after a game, go do yoga, hot yoga or a Pilates class. They ideally should be doing hot tubs, and cold tubs, too, but they have to pick their spots because they don’t have a lot of time.

They all have stretching routines, too, and foam-rollers. I would way rather they use a foam-roller instead of stationary stretching. Being stationary and doing static stretches still works the muscles, and fatigues them. I’d rather a foam roller since it flushes blood in there, which aids in recovery.

6. How is training lacrosse athletes different from other sports?

First of all, they’re not in town for team workouts so I’m more of a consultant, creating plans for each guy to follow when they’re back in their home city.

Another big difference with lacrosse is a lot of these guys play in another league like the MLL or MSL as soon the NLL season is done, and they end up without an off-season. With hockey and football athletes, you have three-or-four months when their season is done to work on getting faster and stronger. With lacrosse, there’s no down time for them to work on anything they specifically need. So the plans need to be highly customized based on a player’s individual needs.

7. Does playing on a hard turf change how they train?

Box lacrosse is a very high-impact sport. That’s where the strength work comes in. When you’re doing a lot jumps it kind of forces the athletes to learn how to cushion their landing so their joints can handle the extra pressure and stress.

But no matter what you do there’s going to be some wear and tear. However, the stronger you physically are, the easier they push through that stuff.

Check out Hope-Ross’ Train Like a Roughneck workout demo below!

A) Hex Bar Deadlift: requires the use of all major muscle groups, it provides overall strength and growth to muscle groups such as quads, hamstrings, glutes, spinal erectors, obliques, abdominals and lower back muscles.

E) Cable Chest Fly: Many athletes experience discomfort in their joints during the bench press movement, and cable flys are a great alternative. With proper shoulder-blade stability, the cable chest fly changes the angle of the movement enough to limit the potential stress on the joints.