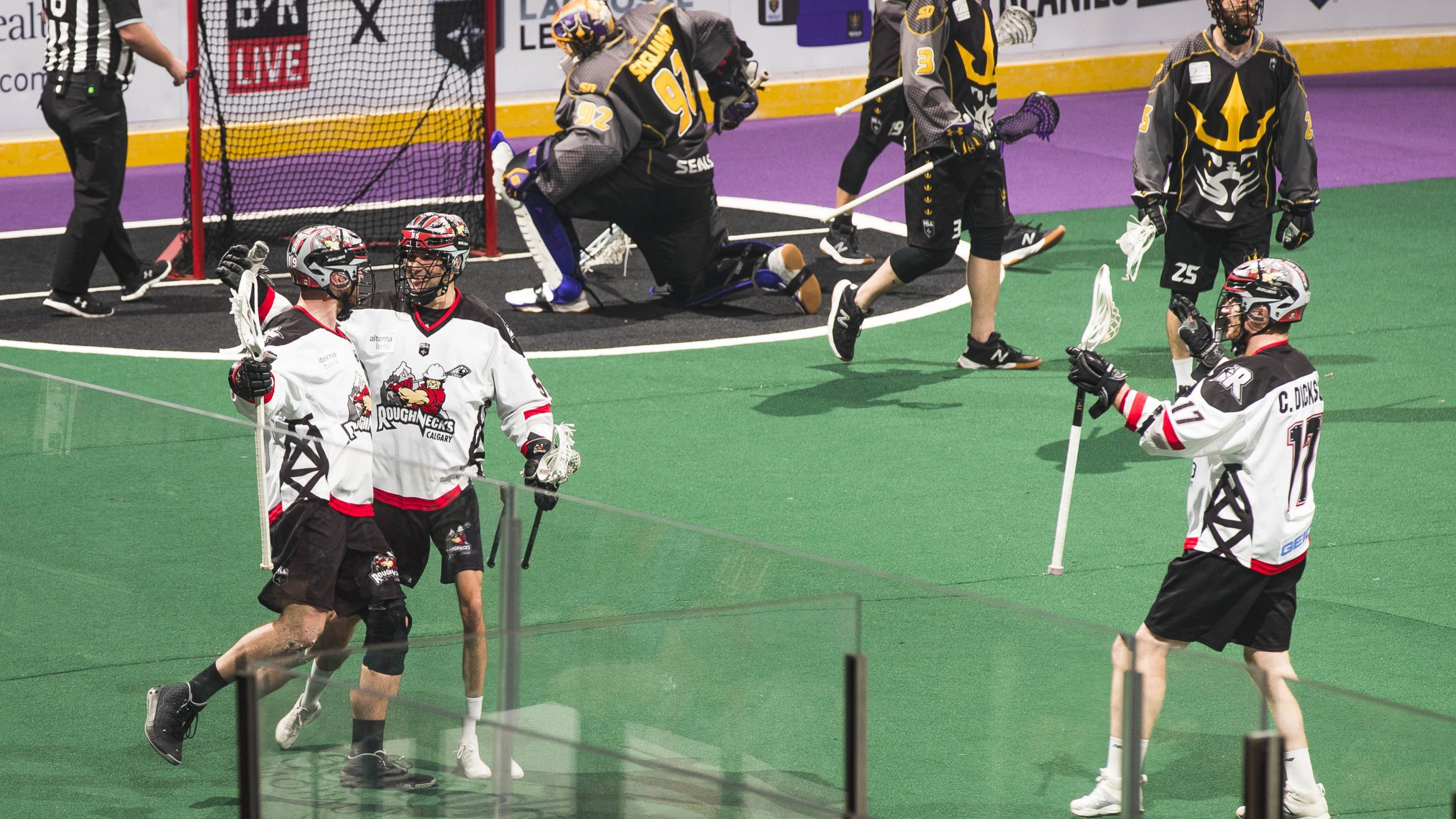 Calgary cruises on the coast.

The Roughnecks (2-1) opened their back-to-back weekend with a 16-11 win over the San Diego Seals at Pechanga Arena.

For those sporting the name ‘Dickson’ on the back of their jerseys, it was a night to remember.

To open the scoring, rookie Haiden Dickson tip-toed the goal line and found the twine behind Frankie Scigliano for his first career marker in his NLL debut. With the second of a pair of goals in the second quarter from Curtis Dickson, another milestone was hit – as Curtis netted the 400th goal of his illustrious career.

San Diego held a lead for a majority of the first half, but three goals in the final two minutes – including a Haiden Dickson goal with 3.6 seconds left in the half – put the Riggers on top heading into halftime.

Entering the second half, Calgary came out of the gate with some hot sticks.

Jesse King converted on the powerplay before launching another shot to complete his hat-trick. Haiden Dickson followed that up with his hat-trick goal, as well, and a 9-5 lead for the visitors.

While the hosts rallied back to claw back from a four-goal deficit entering the fourth quarter, the Riggers were more than up to the task. The elder King tallied his fifth goal of the evening, while Haiden Dickson collected his fourth goal in a big Calgary win.

“I thought we played with a lot of composure. I think last game we got wrapped up with the referees at times and it took away from the way we needed to play. That was a big focus for our guys, to play composed, play resilient, and that’s kind of our MO. There were calls that went against us, but we just played through them and played the one in front of us. That’s how we need to play and when we do that for sixty minutes, we get good results. Tonight it was kudos to the guys for being head-strong.”

“Curtis and Jesse are two guys that take great pride in their game and they know that they’re a big part of our offence. With Dobbie out, they know that they will have extra looks at the net and they need to contribute. I know both of them took it personally that they didn’t get it done last week, so with a week to prepare, it shows their character that they can battle back after a game like that. To have to great floor generals on both sides of the floor, tonight was exceptional.”

“I thought the young guy, Haiden Dickson, played a great game. He scored that great goal early in the game, cut to the middle, right through the heart of the defence. He had some great looks and ended up with four goals. He’s a good athlete and the kid is fearless in the middle of the floor. He gives us a nice element to complement the rest of the guys that we have up front.”

“It’s the nature of the NLL. We’ll get back to the hotel, rehydrate, get some food in them and ice up. We’ll deal with the travel day tomorrow, but let me tell you, come 8 p.m. tomorrow night, we’ll be ready to play. We’ve been through it before, we’re professionals, we’ve travelled before on game day, so there won’t be any excuses and we’ll be ready to play when the ball drops.”

“It was just super exciting. The boys got me all fired up and after the first one, I just kept going so it was a really good experience. I got the one, then the second, the third, and then the fourth. After the first one I didn’t want to stop because it was such a blast.” – Haiden Dickson on his four-goal performance in his NLL debut.

“Super excited to play tomorrow night in Calgary, I want to keep doing this in front of those amazing fans.” – H. Dickson on getting to play in front of the home crowd.

“It’s huge for the team, it meant a lot to me to get the win. It was a super tough game at some parts, but we battled through and came out in the end.” – H. Dickson on the big road win.

The Roughnecks are back in action in less than 24 hours as they head home for the second half of their double-header weekend, where they will battle the Philadelphia Wings on Saturday (8 p.m.) at the Scotiabank Saddledome. Game time is pushed back to 8:00 p.m. to accommodate for team travel. The Roughnecks will be gathering donations to The Veterans Food Bank of Calgary with collection bins outside the entrances to both the West Lobby and The Club Lobby. Fans are encouraged to bring all non-perishable food items, toiletries, blankets or grocery store gift cards.