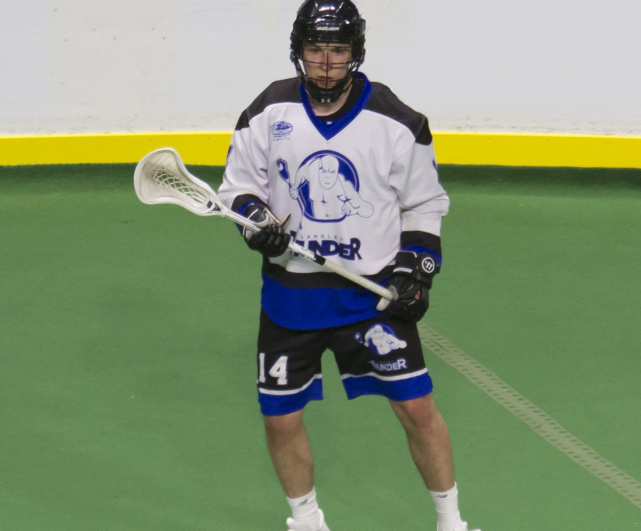 The first week of the Western Lacrosse Association Senior-A circuit has wrapped up, and included some impressive performances from a few Riggers.

The season opened May 23, as the Burnaby Lakers fell 12-7 to the Langley Thunder. Riggers’ transition player and Thunder forward Tyler Pace recorded four points in the win (2+2).

On May 24, Roughnecks forward Curtis Dickson, netminder Frank Scigliano, and their Maple Ridge Burrards opened their season by dropping a 13-6 decision to the New Westminster Salmonbellies. Not a bad outing, though, as Dickson notched five points on the night (3+2), while Scigliano stopped 32 of 44 shots.

The following evening the Victoria Shamrocks took on the Lakers to start their campaign and came out on top in a close 13-11 tilt. Roughnecks and Shamrocks defender Greg Harnett helped lead the team to victory with solid play in his own end.

On May 27, Riggers forward Riley Loewen played his first WLA game of the summer with the Burrards, helping them win their first tilt of the season 8-3 over the Nanaimo Timbermen. Loewen notched two goals and three helpers in the win, while Dickson recorded three goals and two assists, and Scigliano stood on his head stopping 45 of 48 shots.

Most recently, the Burrards came out on top over the Thunder, beating them 16-9 last night. Dickson was the top offensive contributor in the win with 10 points, (8+2), while Loewen notched one goal and three helpers. Scigliano also stopped 29-of-38 shots for the Burrards. On the other end, Pace tallied four points on the night with the Thunder (3+1).

Transactions: On May 29 it was announced that Roughnecks transition Mitch Wilde had been signed by the Burrards.

In other west coast leagues, Roughnecks goaltender Christian Del Bianco, along with rookies Ryan Martel and Anthony Kalinich, have been finding plenty of success in the BC Junior-A lacrosse league.

Martel, a Riggers forward, opened his season with a win as the Langley Junior Thunder defeated the Delta Islanders 14-8 on May 17. Martel came out hot – scoring a hat-trick along with four assists in the game – and he hasn’t looked back since. After playing just four of the seven games for Thunder this season, Martel already leads the team in points at 24 (11+13). Most recently, Martel scored five goals and notched nine points as the Thunder edged the Port Coquitlam Saints 13-12.

Rookie defender Kalinich also began his BCJALL season with the Thunder in the win over the Islanders on May 17. Kalinich has played three games so far.

The Thunder look to continue their two-game winning streak tonight when they take on Del Bianco and the Coquitlam Junior Adanacs at the Langley Events Centre.

Not surprisingly, Del Bianco has also been solid in the BCJALL so far. He’s played three games and boasts a 5.07 GAA and .839 save percentage. Most recently, he stopped 39 of 42 shots in a dominating 15-3 decision against the Timbermen.