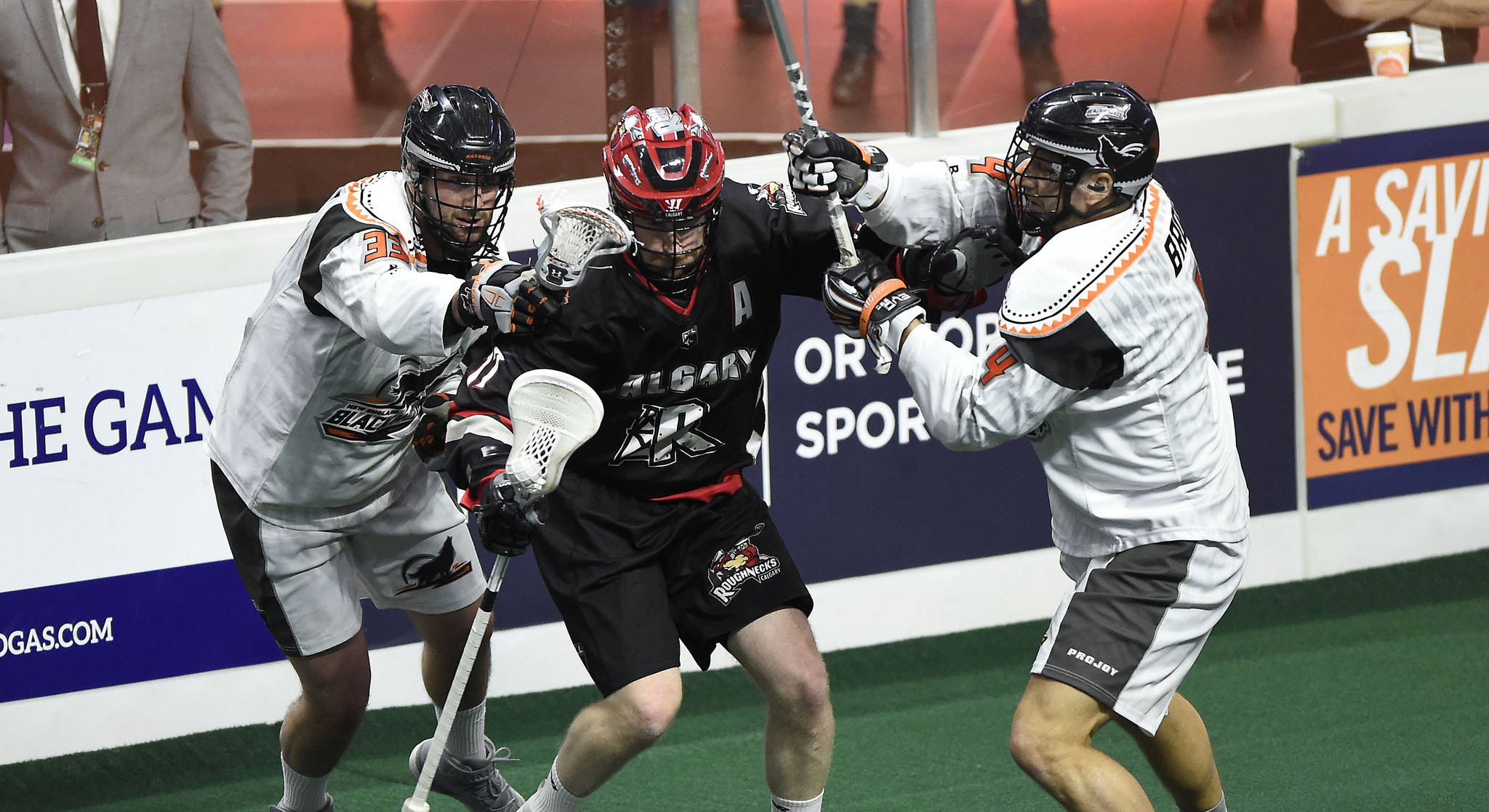 Johnny Powless scored 47 seconds into overtime to lead the New England Black Wolves to a 13-12 win over the Roughnecks at Mohegan Sun Arena on Sunday afternoon.

Wesley Berg had a hat trick and five assists for the Roughnecks (6-9), who held leads of 5-1 and 6-2 before the Black Wolves (7-8) rallied back for the win to keep their playoff hopes in the NLL’s Easter Division alive.

“It’s not the result we wanted, but it was a good playoff-like game,” said Berg, who scored his third goal of the game with just 42.7 seconds left in regulation to give the Riggers a 12-11 lead. “We started off fine. We just lost our focus a little bit in the middle of the game and let them back in it. From there it was a bit of a dogfight. A one-goal game, anything can happen and we came out of the wrong end of it.”

Dane Dobbie had a hat trick to go with four assists, while Holden Cattoni also scored three goals and set up two others. Curtis Dickson tallied two goals and three assists, while Mitch Wilde scored once and had a helper.

“Some guys had some great efforts and there was some things that we need to do a lot better and we’ll fix that,” said Calgary coach Curt Malawsky. “The one bright spot about the whole thing is that we’d rather it happen now than it happen later in the year in the playoffs.”

Callum Crawford led the way for the Black Wolves with five goals and two assists, while Kevin Crowley had a hat trick and three helpers. Powless finished with two goals, while Brett Manney, Mark Cockerton and Stephan Leblanc also scored.

Aaron Bold played well in the New England net as he finished with 41 saves to pick up the win.

After Berg’s late goal in the fourth quarter, the Black Wolves managed to get the ball back and Leblanc scored with just 6.3 seconds left on the clock and Bold on the bench for an extra attacker.

“They came back and we kept on sticking with it, sticking with it,” Malawsky said. “We scored a goal late in the fourth quarter to go up and then Leblanc had a good open lane there and just took a shot that hit the post and went in.”

Berg had an early chance in overtime to score, but wasn’t able to get the ball past Bold before Powless took a pass from Crowley at the other end of the floor and snapped a shot to the short side past Del Bianco.

“I had a good chance at the end, just missed the net and they got one right back,” Berg said. “In overtime, they usually go pretty quick.”

Berg opened the scoring with a goal during a Calgary man advantage at 2:23 of the first quarter before Crawford responded with a powerplay goal for New England 2:11 later.

Dobbie put the Riggers up 2-1 before the end of the first when his heavy shot hit Bold before bouncing up in the air and across the line.

Dickson took a behind-the-back feed from Berg and snapped a shot to the short side past Bold for another powerplay goal for the visitors 75 seconds into the second quarter.

Cattoni and Wilde then scored goals 60 second apart to put the ’Necks up 5-1 before Crawford counted his second of the contest for the homeside.

After Cattoni fired a low outside shot past Bold, the Wolves responded with goals by Powless, Cockerton and Crawford to pull within a goal before the halftime intermission.

Berg put the Riggers up 7-5 at 2:48 of the third quarter before Dickson flicked a shot to the far side past Bold for another powerplay marker for the ’Necks one minute later.

Crowley, Crawford and Manney then responded with three straight shorthanded goals to tie things up before Dobbie converted a feed from Berg at 14:01 of the third.

After Crowley scored a pair of early goals in the fourth, Cattoni fired another outside shot past Bold to register his hat trick.

Crawford then scored his fifth of the game to put the Wolves back up by a goal before Dobbie and Berg responded for the Riggers to set up the exciting finish.

Next up, the Roughnecks will host the Buffalo Bandits at the Scotiabank Saddledome on Saturday (7 p.m.).

“The good news is that at least we set ourselves up that we’re in (the playoffs) and we can try to get things going next week against Buffalo on fan appreciation night, so that’s exciting for us,” Berg said. “We’ve got the best fans in the league and we’ll get another chance to redeem ourselves here.”